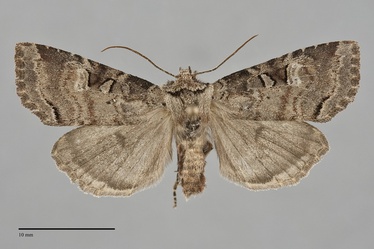 Hillia iris is a small to medium-sized moth (FW length 15–16 mm) that flies in northern British Columbia and eastern Idaho during late summer and fall. It has a gray to tan forewing with a dark costa and cell, incomplete black outlines of the forewing spots, and a distinct black shade before the posterior subterminal line. The ground color of the most common lighter form is tan to gray-tan, often with an olive or purplish tint, darker gray to gray-brown on the costa from the basal line to the subterminal line and in the cell. The dark fades posteriorly across the subterminal area where it is wine red. The terminal area is olive-gray, sometimes with dark veins. The basal, antemedial, and postmedial lines are gray, double filled with the ground color. The basal and antemedial lines are mildly irregular, oriented perpendicular to the long axis. The median line is gray-brown to dark wine-red, complete, slightly angled at the lower reniform spot. The postmedial line is sinuous, close to the reniform spot and focally concave toward the base lateral to the spot, and perpendicular to the posterior margin below the spots. The subterminal line is pale tan, offset slightly below the apex and slightly irregular elsewhere. It is preceded by the dark shade on the costa and a concave black shade from CuA2 to the posterior margin. The terminal line is gray to dark red, interrupted at the veins. The fringe is red-tan or brown with pale tan spots at the ends of the veins. The orbicular and reniform spots are partially outlined in black and filled with light tan. The orbicular spot is a slanted oval, usually open at one end or both. The reniform spot is kidney-shaped, usually open except for the basal side. The claviform spot is represented by a few black scales at its tip. The hindwing is tan with variable brown to gray suffusion that is darkest in the submarginal region, with similar discal spot and very faint postmedial line. The hindwing fringe is grayer or redder than the ground color. The head and thorax are similar to the forewing color, with a brown band across the distal collar and a dark gray edge. The dark form of this species is dark gray-brown with light filling of the reniform spot and the black shade near the anal angle. The male antenna is beaded.

This species should only be suspected in northern British Columbia and in the Rocky Mountains. It can be recognized by its tan or gray-tan color, dark costa and cell, pale tan filling of the spots, and the black line at the posterior subterminal line. Tan specimens could potentially be confused with Diarsia calgary and Parastichtis suspecta which are similar in size and shape, but both species lacks the black line near the anal angle. The dark form of H. iris is similar to Hillia maida, but this species has less complete filling of the reniform spot and has a prominent black claviform spot that H. iris lacks.

This species is widely distributed across Canada in cool, wet forest and bog habitats.

This moth has been found in south-central British Columbia. It likely also occurs in the far northern part of the province. In Idaho, a single record exists for the extreme southeastern part of the state at Montpelier.

Hillia iris is a Holarctic species that is found across the northern Hemisphere to Scandinavia. It is widespread in northern North America, ranging south to British Columbia, Alberta, and southern Wyoming in the West. It is found south to the northern United States in the East, reaching the Great Lakes region, New England, and northern New York

No information is presently available regarding larval foodplants of this species. It most likely feeds on willows (Salix spp.) in the Salicaceae.

This moth flies during late summer and early fall, typically in late August and September. It is nocturnal and comes to lights.