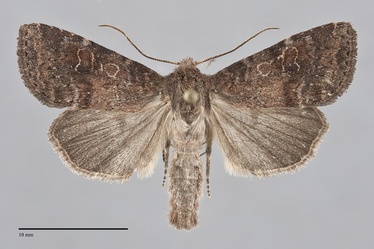 Parastichtis suspecta is a small, variable, and relatively nondescript moth (FW length 13–16 mm) that flies in boreal and montane forests during the summer. It is uniformly dark to mottled light and dark gray-brown, often reddish in lighter specimens, with complete but inconspicuous markings. The forewing is relatively short and broad, with a slightly hooked apex in a few specimens. Most specimens are dull brown-gray, with others more colorful reddish gray-brown, or mottled dark with lighter gray or red-brown on the posterior half of the wing, in the distal subterminal area, and at the apex. The terminal area is slightly darker and grayer than the rest of the wing. The basal, antemedial, and postmedial lines are gray to brown, double filled with tan, gray, or purplish gray. The antemedial line is slightly irregular, slightly angled toward the outer margin. The medial line is absent to dark red-brown or brown, slightly angled from the costa to the lower reniform spot, then perpendicular to the posterior margin. The postmedial line is toothed with dots on the veins at the tips of the teeth, drawn sharply toward the base on the costa, smoothly curved near the reniform spot and curved by the lower reniform spot to meet the posterior margin at a right angle. The subterminal line is reddish tan, offset near the costal and posterior margin and undulating across the rest of the wing. The terminal line dark gray, interrupted by the veins. The fringe matches the ground color. The orbicular and reniform spots are outlined in weak outer dark and more prominent light inner lines and are filled with the ground color, purplish gray, or reddish tan. The orbicular spot is round. The reniform spot is a weak figure-eight. A weak claviform spot is sometimes present. The hindwing is brownish-gray, darker gray on the outer half, with slightly darker discal spot, vains, and terminal line. The hindwing fringe is gray with a striped ochre and dark gray base. The head and thorax are even gray-brown or brown. The male antenna is beaded.

This moth is rather nondescript and lacks prominent diagnostic features. It is most easily recognizable by the dark or mottled brownish color, often reddish, with light outlines of the round orbicular and 8-shaped reniform spot. Parastichtis suspecta can be very close in superficial appearance to Diarsia dislocata,with which it flies. The orbicular spot of this moth is variable, but usually not round with a pale outline, as in P. suspecta. Its postmedial line is scalloped, but not toothed with dots in the subterminal area on the adjacent veins. It also lacks spotted terminal line, and therefore has a less spotted look on the distal wing than P. suspecta. Several small dark Brachylomia species, especially Brachylomia thula and Brachylomia algens, are also similar but they have dark spots near the posterior subterminal line and wider male antennas. The light form of Hillia iris is reminiscent of the light motted forms of P. suspecta, but have a black mark near the anal angle that is lacking in P. suspecta.

This species is widely distributed in cool, moist forest habitats throughout much of North America.  It is rare and sporadic in most of the Pacific Northwest, except in British Columbia where it is more common.

Scattered records of this species are found in forest from throughout most of British Columbia, the Cascades, the Blue Mountains of southeastern Washington, and the mountains south of Twin Falls, Idaho. It is likely to be more widespread than these isolated records suggest.

This species has a Holarctic distribution and is widespread in northern and central Eurasia, including on Iceland and Japan. It is also widespread in North America, occurring across the northern Continent from Alaska to Hudson Bay and New Brunswick. The southern limits are South Carolina in the East, Colorado and Utah in the Rocky Mountains, and California near the Pacific Coast.

This species is known to feed on various hardwoods including willows (Salix spp.) in the Salicaceae and birches (Betula spp.) in the Betulaceae.

The flight period of P. suspecta is the summer. It has been collected during July and August in our region, but flies as early as June in some portions of its range. It is nocturnal and comes to lights.