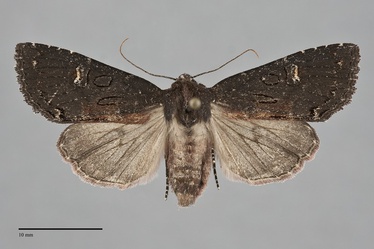 Hillia maida is a rarely collected, blackish-brown, medium-sized moth (FW length 17–19 mm) that flies in the northern Cascades and in the Rocky Mountains during late summer and early fall. It has crisp black spot outlines, light yellow scales in the reniform spot, and an absence of lines other than an ochre and black subterminal line. The forewing has a slightly pointed apex and a scalloped outer margin. The color is even matte blackish-brown, fading to warm orange-brown along the posterior margin. Several white dots line the distal costa. A thin black streak is present on the posterior margin. The only lines that are evident are the subterminal and terminal lines. The subterminal line is comprised of an even row of small, diffuse ochre or light orange spots preceded by black, increasing in strength to the trailing margin. The terminal line is similarly black, continuous near the anal angle and broken into spots between the veins elsewhere. The three spots are outlined by crisp black lines. The orbicular spot is oval and the claviform spot is moderate-sized with a rounded apex. Both are filled with the ground color. The reniform spot is kidney-shaped or hourglass-shaped, filled with the ground color and dark gray medially and pale ochre to light orange scales laterally. The hindwing is brownish gray with slightly darker submarginal suffusion, a weak discal spot, and a dark terminal line. The hindwing fringe is gray, sometimes pinkish, with a darker base. The head and thorax are brown-black with a median crest on the anterior thorax. The male antenna is beaded.

This moth can be identified by its even dark brown color, slightly lighter and warmer along the posterior margin, black spot outlines that look embossed against the dull background, the pale filling of the reniform spot, and the absence of lines other than the black-and-pale spotted subterminal line. Orthodes obscura has similar dark color and a similar subterminal line, but it flies during late spring and early summer and can be excluded by its collection date. Several dark Aseptis species, particularly Aseptis fannatica, Aseptis ethnica, and females of Aseptis fumosa (males have white hindwings) are similarly dark. All of these Aseptis species lack pale scales in the reniform spot and the black component of the subterminal line that is present in H. maida.

This species is widely distributed at higher elevations and appears to be very rare and sporadic.  It may favor willow scrub and riparian habitats along creeks based upon the larval foodplant. It has been collected in relatively dry open mid-elevation slopes with willow scrub in Chelan County in the Washington Cascades.

Hillia maida has been found in the Cascades Mountains in Washington. Further east it occurs in the Rocky Mountain ranges of southeastern British Columbia and northern Idaho.

This species appears to have a limited range in the mountains of western North America. It has been collected in northeastern and east-central California and the Rocky Mountains of Alberta, Wyoming, and Colorado outside of the Northwest region.

This species is a foodplant specialist feeding on willows (Salix spp.) in the Salicaceae.

The flight period of H. maida is late summer and early fall. It has been found during late August and early September in our region.