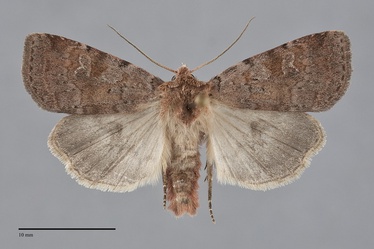 Diarsia dislocata is our only Diarsia species with gray ground color with variable amounts of red-brown suffusion. Like other species in the genus, it is small to medium-sized (FW length 13 - 15 mm). The forewing is relatively broad, typical for the genus, with gray to brown-gray ground color that is most evident at the base of the forewing. The forewing is heavily suffused with red-brown, darkest in the median area and medial to the subterminal line near the apex. The terminal forewing is dark brown-gray in some individuals. The transverse lines are slightly darker gray and double, but only the component near the median area is strong, with light filling. The antemedial line is irregular to straight, oriented across the forewing. The postmedial line is weakly to moderately scalloped. The pale subterminal line is near straight except for an offset near the apex. The terminal line is broken into a series of lines between the veins. The orbicular spot is round to oval, variably outline in black or black with and inner yellow line, but is evident only as pale filling in most specimens. The reniform spot is similar, fairly large and kidney-shaped lacking a dark outer line in most specimens but is evident due to pale gray filling. The hindwing is light brownish-gray with slightly darker gray discal spot, postmedial line, and submarginal band. The thorax is gray to light gray-brown with a slight reddish tint and slightly lighter collar. The male antenna is bead-like.

This species can usually be identified by the combination of gray and red-brown color, relatively small size, and broad forewing shape. It most closely resembles Diarsia rubifera in our region, but this species is dull red-brown, rather than gray and red-brown, and has a black spot at the expected position of the claviform spot that D. dislocata lacks. It is superficially similar to Lycophotia phyllophora, another species in the tribe Noctuini, and Parastichtis suspecta in the tribe Xylenini. The former species is red-brown rather than gray and red-brown, but the latter species has similar color, size, and pattern and occurs in similar habitat. Many specimens of P. suspecta are more mottled with purplish gray and red-brown than D. dislocata, but some specimens are very similar in color, shape, and size. These individuals can be distinguished without dissection by the shape of the reniform spot, kidney-shaped with a convex medial margin in D. dislocata and figure-eight shaped with a concave medial margin in P. suspecta.

This species is widely distributed in boreal spruce-fir forests across Canada and Alaska, extending southward at higher elevations in the northern Rocky Mountain region.

Diarsia dislocata occurs in British Columbia and the Cascade Mountains of northern Washington in our region.

This species is found in boreal, subarctic, and montane habitats across northern North America from Labrador to Alaska. The range extends south to Maine, the south Ontario border near Minnesota, and northern Washington. A single record from Colorado is also shown in Lafontaine (1998).

This species appears to be single brooded. Pacific Northwest records are from July and August. It is nocturnal and comes to lights.