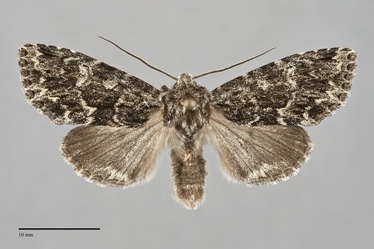 Platypolia contadina is a variable, medium-sized to large dark-gray moth (FW length 17–21 mm) that flies in forests during the fall. It has gray hindwings in both sexes, as well as a strongly mottled light and dark gray forewing with black and white spots and lines. The outer margin of the forewing is scalloped. The median area is mottled dark gray, slightly lighter on the costa. The darkness of the rest of the wing is mottled and highly variable in darkness, powdery whitish gray to almost as dark as the median area. Diffuse black spots are present on the costa in the subterminal area, in the terminal area distal to the cell and in the fold. A short black basal dash is present, a thin black bar extends across the median area in the fold, and a black line is present along the posterior margin across the antemedial area. The basal and antemedial lines are black filled with white to medium gray, irregular with teeth toward the base on the veins. The antemedial line is angled slightly toward the outer margin and weakly excurved. The median line is black, thin but diffuse, sinuous and angled below the reniform spot. The postmedial line has black inner and white to light gray outer components, palest in the fold; is toothed sharply toothed toward the outer margin on the veins and with a spike-like tooth towards the base in the fold; drawn toward the base on the costa, curved toward the base near the costa and angled toward the base across most of the wing with slight excurved on the anterior wing and a slight concave basad segment in the fold. The subterminal line is white to light gray, a series of diffuse spots forming a sinuous line with a moderate W-mark on M3 and CuA1. It is preceded by black chevrons across most of the wing, strongest posterior to the level of the cell, and a black shade near the similar color in the terminal area. A terminal series of strong black triangles is present at the base of the checkered fringe. All three spots are outlined by thin black lines. The orbicular spot is moderate-sized, round or slightly ovoid, filled with white to medium-dark gray and a dark ocellus. The reniform spot is moderate to large, broadly kidney-shaped, usually symmetrical but sometimes extended toward the outer margin at the costal end, filled with white to medium gray peripherally and mottled darker gray centrally. The claviform spot is moderately large, fused to the median bar. The hindwing is medium-gray with darker discal spot and submarginal band and a thin dark terminal line. The hindwing fringe is white with a gray base. The head and thorax are hoary light to dark gray with black lines on the collar and tegulae. The male antenna is biserrate.

This moth can usually be identified by its moderately large size, fall flight period, and strongly mottled dark gray and white to medium-gray forewing with large spots and serrate lines. It is similar to Platypolia loda, a species that occurs in dry forests and occurs with it on Vancouver Island, in southwestern Oregon, and at some mid-elevation localities further east, as well as Platypolia anceps, a more boreal species that has been found in British Columbia and the Oregon Cascades in our region. Males of P. loda have white hindwings and are easily distinguished from P. contadina, but females are similar. Platypolia loda tends to be darker charcoal gray without strongly contrasting lighter areas and has a large reniform filled with medium gray and a pale central lunule. The pale areas on P. contadina are usually more strongly contrasting, and the peripheral reniform spot is lightest whereas in P. loda the lightest portion of the spot is the central crescent. Males of P. anceps are also easily distinguished from P. loda because they have a wide bipectinate antenna, narrow and biserrate in P. contadina, but females can be similar. Platypolia anceps is often brownish, pure gray in P. contadina, and the filling of the reniform spot and subterminal area is more uniform light gray without mottling. The anterolateral corner of the reniform spot of P. anceps is often extended toward the margin and the subterminal chevrons are small and sharply-defined. All species of Platypolia can be distinguished from Xylotype arcadia by the absence of a long black dash at the anal angle.

This moth is geographically variable. The coast populations are strongly mottled black and white, those from high elevations in the Cascades and further east are darker gray. The ones from the central California coast are silvery gray.

The type locality of Polia contadina Barnes and Benjamin is British Columbia, Victoria.

The larva is smooth and green with a thin white lateral line.  It is illustrated by Miller & Hammond (2003).

This species is widely distributed in moist forests throughout much of western North America.  In the Pacific Northwest, it is common in coastal rainforests and mixed hardwood forests at low to middle elevations west of the Cascades, and common to abundant in spruce-fir forests at high elevations along the summit of the Cascades.  In both the Rocky Mountain and Siskiyou regions, it is moderately common in mixed hardwood-conifer forests at middle to high elevations and, in southwestern Oregon, in oak woodlands at low elevations.

Platypolia anceps is widespread in forests throughout much of our region, except in the Basin and Range mountains of southern Oregon and Idaho. It is found west of the Cascades as far north as Vancouver Island, although it is uncommon in western Washington except in the rain shadow near the Gulf of Georgia. It is found throughout the Cascade and Siskiyou Mountains. Further east is occurs throughout the southern third of British Columbia, in northern Idaho, and in the Blue Mountains of Oregon and Washington.

This moth is found in northern and central California and in the Rocky Mountains outside of the Pacific Northwest. The California populations occur in the Sierra Nevada and along the coast to Monterey County.

This species is a foodplant generalist feeding on many kinds of hardwoods in the families Ericaceae, Salicaceae, Betulaceae, Rosaceae, and Caprifoliaceae, but particularly favors huckleberries (Vaccinium spp.) in the Ericaceae and currants (Ribes spp.) in the Grossulariaceae.

The adults fly during the fall, beginning in late August in the Northwest. They have been collected into early October. It is a nocturnal species that comes to lights.