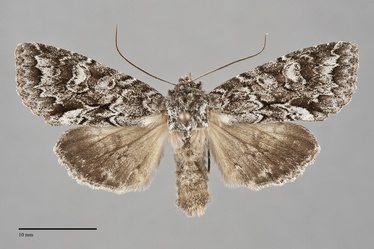 Xylotype arcadia is a medium-sized to large moth (FW length 18–23 mm) that flies in forests with acid soils during late summer and fall. It has strongly mottled, bark-like gray forewings with a short black median bar and long anal dash. The forewing is relatively broad and has a strongly scalloped outer margin. It is mottled in shades of bluish gray without any warm colors or pure white elements to the naked eye (some white scales are evident under magnification). The costa, median area, and terminal area are darker than the rest of the wing, and the distal subterminal area is lighter with contrasting darker veins. A short black bar is present across the median area which is narrowed in the fold due to a strong inward tooth of the postmedial line. A long black anal dash extends from the proximal subterminal area to the outer margin above 1A+2A. The basal, antemedial, and postmedial lines are gray, double filled with light gray. The basal line is irregular, incurved on the costa. The antemedial line is irregular, toothed toward the base on the veins with a very long tooth on 1A+2A, angled toward the outer margin except bent toward the base on the posterior margin. The median line is dark gray, diffuse, angled 90° at the lower end of the reniform spot. The postmedial line is somewhat square with long teeth on the veins around the end of the reniform spot, and has a very long tooth toward the base in the fold which narrows the median area and shortens the median dash. The subterminal line is pale gray followed by a black shade in the terminal area, irregular with scalloping and a short W-mark on M3 and CuA1 that does not approach the outer margin. The terminal line is light gray with weak dark spots in some specimens. The fringe is gray with light gray lines across it at the ends of the veins to produce a tessellated appearance. The orbicular and reniform spots are outlined in thin dark gray to black peripheral and wider inner light gray components. The orbicular spot is round, irregular, or somewhat rectangular in shape, filled centrally with slightly darker gray. The reniform spot is very large, weakly figure-eight-shaped, filled peripherally with the ground color and centrally with a large patch of lighter gray. The claviform spot is gray, weakly evident at the base of the median dash. The hindwing is gray-tan with darker gray discal spot, thin postmedial line, and broad submarginal and relatively thin marginal bands. The hindwing fringe is white with a two-toned ochre and gray base. The head and thorax are blue-gray with a black lines across the distal collar and near the edges of the tegulae. The male antenna is filiform.

This moth exhibits geographic variation in the Pacific Northwest. The populations from west of the Cascades are larger and more strongly mottled than those from further east which are duller and uniformly darker gray.

This species is widely distributed in coniferous forests across Canada, extending westward to the Pacific Northwest.  It is uncommon and sporadic in a variety of Pacific Northwest habitats, usually with acid soils. It is most frequent in bogs along the Pacific Coast, in low-elevation heathlands in the Puget Trough, and at high elevations near the summit of the Cascades. It is found in boreal forests in eastern Washington and British Columbia and spruce-fir forests in the Rocky Mountain region.

Xylotype arcadia is found west of the Cascades in Washington, along the Pacific Coast, on the Kitsap Peninsula, and along the west slope of the Cascades. It is more widespread in British Columbia where it is found at least as far north as the north-central part of the province. It also occurs in northeastern Washington and in western Montana.

This moth is widespread in boreal North America. It occurs west across boreal Canada and the Great Lakes region of the northern United States to Nova Scotia. The range does not extend south in the mountains.

The only known foodplant record in eastern North America is larch (Larix spp.) in the Pinaceae.  It is unknown if this species is mostly feeding on conifers in the Pacific Northwest, or if it also feeds on hardwoods.

The flight season of this moth is late summer and fall. The records from our region span early August to early October. It is nocturnal and comes to lights. It has also been collected at sugar baits in bogs along the Pacific Coast of Washington.