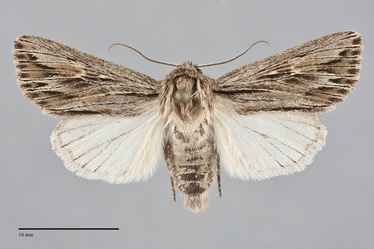 Rhizagrotis cloanthoides is a small to medium-sized moth (FW length 13–17mm) that flies in xeric habitats during the summer. It has a longitudinally streaked, brown and gray forewing with black dash-like marks at the base and on the distal part of the wing. The ground color is light brown, with a streaked pattern due to thin dark veins bordered by light gray. The terminal area is darker brown with reduced gray near the veins in this area. A long thick black basal dash is present. Black marks are present in the cell and posterior to the reniform spot adjacent to proximal veins CuA1 and CuA2. The subterminal line is comprised of similar black marks on the mid wing, and there is a black streak on the distal half of the posterior margin. The terminal line is a series of large black spots that continue through the basal fringe. There are no traces of the lines proximal to the black subterminal line. It is irregular, pulled toward the base on M2, extends to the outer margin as a W-mark on M3 and CuA1, and drawn toward the base in the fold. The orbicular and reniform spots are irregular streaky white marks in the cell. No trace of the claviform spot is present. The hindwing and fringe are brownish white with dark gray veins and terminal line. The thorax is gray-brown with gray lines near the edges of the tegulae. The male antenna is beaded.

This moth can be recognized by its streaked brown and gray forewing with strong black marks at the base, near the end of the cell, and on the distal wing. The pattern of the subterminal line gives the impression that the terminal area is depressed relative to the subterminal area and more proximal wing. Rhizagrotis cloanthoides is most likely to be confused with several species of Protogygia, with which it flies. These species are similar in size and streaky brown, but all lack the black subterminal line of R. cloanthoides. In addition these Protogygia species have pale-rimmed elongate orbicular spot that are often fused with the reniform spot unlike the poorly-defined spots in R. cloanthoides.

This species is found at low elevations in the Columbia Basin and Great Basin regions in very dry sagebrush steppe.  It is often common in this restricted habitat, particularly in the Alvord Desert of southeastern Oregon.

Rhizagrotis cloanthoides is found in the Columbia Basin, particularly in the western part. It occurs in eastern and southern Oregon, and on the Snake River Plain in southern Idaho.

This moth is found on the western Great Plains as far north as south-central Alberta, and across the Southwest to southern California.

Adults of R. cloanthoides are on the wing during June and July in our area. They are nocturnal and come to lights.