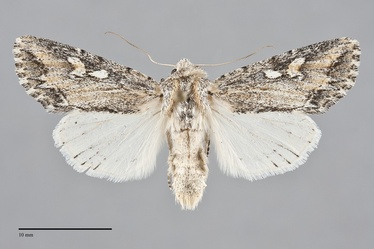 Rhizagrotis stylata is a medium-sized moth (FW length 15–18 mm) that flies in the deserts of southern Idaho and Oregon during the summer. It has rust-tinted white forewings with gray costal and outer margins, elongate pale-filled spots, and a straight subterminal line with a strong W-mark. The forewing is a powdery mixture of white, dark gray, and rusty scales producing a pale rusty color on most of the wing. The costa and terminal area are darker gray, also strongly powdery. The basal and antemedial lines are limited to gray spots on the costa and faint  gray lines anterior to the cell. The postmedian line is diffuse gray, incomplete, drawn sharply to the level of the medial reniform spot, and has an unusual straight lateral segment that nearly overlaps the subterminal line near the outer margin. The subterminal line is powdery dark gray, angled toward the base across the distal wing and straight except for a strong W-mark with teeth to the margin on M3 and CuA1. The fringe is strongly checkered light rust and gray. The orbicular and reniform spots are diffusely outlined in dark gray and are filled with white and rusty scales. The orbicular spot it an elongate oval, nearly touching the reniform spot. The reniform spot is sideways V-shaped and contains a small dark gray spot in the lower end. No claviform spot is evident. The hindwing and fringe are pure white, with scattered dark gray scales on the veins in the marginal area. The head and thorax are hoary, pale gray with rust-colored edges on the tegulae. The male antenna is beaded.

This moth can be recognized in its desert locale by the combination of pale rust-colored forewings with dark margins, pale-filled spots, and the prominent subterminal line with toothed W-mark. It is unlikely to be confused with other species. Andropolia diversilineata could potentially be mistaken for a gray specimen of R. stylata. It is gray rather than pale rust-colored, has better-defined forewing lines but lacks pale-filled spots, has dark shading on the distal hindwing, and very wide antennae in males.

This species flies in desert regions of the Great Basin and is mostly found on very dry, desert sagebrush steppe at low elevations.  It is particularly common on the Alvord Desert of southeastern Oregon.

This moth is found predominantly in the American Southwest from California to Colorado. It also occurs on the western Great Plains as far north as southern Canada.

This moth flies during early summer, typically during June and early July. It is nocturnal and comes to lights.