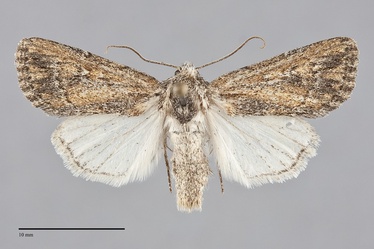 Rhizagrotis modesta is a small to medium-sized moth (FW length 13–15 mm) that flies in the deserts of southeastern Oregon during the summer. It has powdery, light rust-brown and gray forewings with inconspicuous markings, and nearly white hindwings. The forewings appear slightly blunted. The color is light rust-orange, heavily dusted with gray. Medium-dark gray fans out from the reniform spot to the irregular subterminal line, and is also present along the costal and trailing margins in most specimens. A few specimens are nearly uniform dusty gray with but a sprinkling of rusty scales. A dark spot or weak basal dash is present at the base of the cubital vein. The basal and terminal lines are absent. The antemedial line is a gray spot on the costa. The postmedial line is gray, weakly scalloped, drawn toward the base on the costa, weakly excurved across most of the wing, and incurved at the posterior margin. The subterminal line is evident as the transition between the gray subterminal area and orange terminal area, jaggedly irregular with several teeth extending to the outer margin. The terminal line is a series of gray dots. The fringe is checkered orange and gray. The reniform spot is ill-defined, gray, kidney-shaped. The orbicular and claviform spots are absent. The hindwing is white with a very light dusting of gray scales near the outer margin and an incomplete dark gray terminal line.  The hindwing fringe is white with a yellow base and scattered gray scales. The head and thorax are an even mixture of orange and gray scales. The male antenna is beaded.

This moth can be identified by its desert habitat, summer flight period, and dusty rust-orange and gray forewing with very limited markings. It is similar to Condica discistriga, with which it flies. This species has a more pointed apex, a diffuse gray shade through the cell from the base to the outer margin, and a checkered white and gray fringe.

This species is endemic to desert regions of the Great Basin.  It is most common in very dry, desert sagebrush steppe at low elevations, and is particularly abundant in the Alvord Desert of southeastern Oregon.  It is uncommon in juniper woodlands at middle elevations.

Rhizagrotis modesta is only known from southeastern Oregon in our region.

The range of this moth extends south to Baja California through Nevada and California.

The flight period of R. modesta is the summer and early fall. It has been collected from mid-June to early September in the Northwest. It is nocturnal and comes to lights.