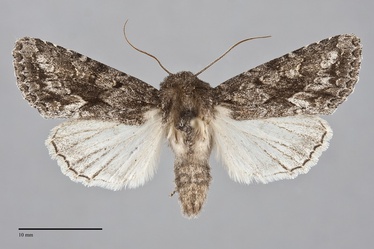 Sutyna privata is a medium-sized moth (FW length 17–18 mm) that flies in the eastern part of the Pacific Northwest during the fall. It has a mottled, powdery, dark gray forewing with black basal and median dashes. The outer margin is slightly scalloped with a saw-tooth terminal line. The color is medium-dark gray to powdery slightly brownish charcoal gray, lightest along the posterior margin, in the distal antemedial area, the mid-subterminal areas, and at the apex. The basal dash is short, not reaching the antemedial line, and the median dash is thick and bar-like. The basal line is barely evident on the costa. The antemedial and the postmedial line are dark gray, double filled with light gray, strongest adjacent to the median area. The antemedial line is angled slightly toward the outer margin, is slightly excurved, and is drawn toward the base. The median line is dark gray, very faint and diffuse. The postmedial line is toothed on the veins, drawn toward the base on the costa, angled toward the base lateral to the reniform spot, and bent with apex toward the base at the median line. The subterminal line is light gray, slightly irregular with an offset below the apex and another toward the base in the fold. It is preceded by a dark gray shade, weakest opposite the cell and condensed into several indistinct black chevrons on the mid-wing and in the fold. The terminal line is a series of black triangles which accentuate the toothed appearance of the margin. The fringe is gray. The orbicular and reniform spots are partially outlined in black. The orbicular spot is oval, nearly touches the reniform spot, and is filled with light gray and often a central dark gray ocellus. The reniform spot is poorly-defined at the anterior and posterior ends, filled with variable white and light and dark gray scales, usually lightest laterally. The black claviform spot is fused to the median bar. The hindwing and fringe are white with a light sprinkling of dark gray scales near the outer margin, dark gray veins and terminal line. The head and thorax are dark brownish gray with a weak black line near the edge of the collar. The male antenna is weakly biserrate.

This species is widely distributed in moist forests across Canada. It is found in mixed hardwood-conifer forest and dry ponderosa pine forest in the Northwest.

Sutyna privata is found from southern and central Alberta east to Newfoundland through southern Canada and the adjacent United States. The range extends south to northern Florida along the East Coast.

The flight period of S. privata is the fall. It has been collected from late August through September in our area.