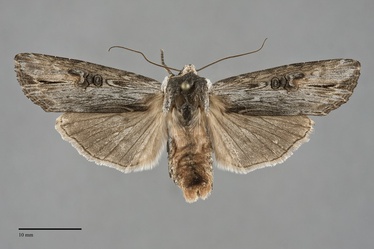 Xylena brucei is a large, streaky gray moth (FW length 23–25 mm) that flies in open forest and shrub-steppe during late fall and early spring. It has closely apposed double-rimmed orbicular and reniform spots that are followed by a pale tan and black streak distally. The forewing is long and has a slightly scalloped outer margin. It is streaky ash-gray with darker costa, posterior margin, and outer margin. A pale yellow-tan streak extends distally from the reniform spot which abuts a long black spike-like wedge in the subterminal area between veins M2 and M3. A long but thin basal dash is often evident, and a thicker dash-like mark is evident at the base of the trailing margin. The veins are thin and dark. The basal and antemedial lines are gray, nearly obsolete except for a long loop of the antemedial line that nearly touches the orbicular spot in the cell. The median line is absent. The postmedial line is a series of small dots on the veins. The subterminal line is pale gray, offset near both margins and forming a diffuse W-mark to the outer margin on M3 and CuA1. It is preceded by a gray shade near the spike-like wedge described above. The fringe is dark gray. The orbicular and reniform spots have a double dark gray outline and are placed close to each other on the mid-wing. The orbicular spot is round to ovoid with parallel medial and lateral edges, filled with the ground color. The reniform spot is upside-down hourglass-shaped with a larger anterior that is drawn toward the outer margin. It is filled with lighter gray. No claviform spot is present. The hindwing is medium-dark brownish gray with a slight sheen, with darker gray discal spot, veins, and thin terminal line. The hindwing fringe is whitish gray with a darker base. The face is dark gray and the head and base of the collar are light tan. The distal collar, central thorax, and most of the tegulae are dark gray. The anterolateral tegulae are light gray. The male antenna is biserrate.

This moth can usually be identified by its late fall or early spring flight season, large size, ash-gray color, the pale yellow and black markings distal to the reniform spot. Other gray Xylena species such as Xylena cineritia and Xylena thoracica are smaller, have some warmer brown color on the forewing or thorax, and have a brighter yellow streak distal to the reniform spot.

Larva is smooth, mottled brown with a white lateral stripe.  It is illustrated by Miller & Hammond (2003).

Xylena brucei occurs east of the Cascades as far north as south-central British Columbia. It is most common in the western part of the Columbia Basin. This moth is limited to the Siskiyou Mountains west of the Cascades. It has not been found in southern Idaho.

This moth is distributed in western North America. It occurs from central Alberta to Colorado on the western Great Plains. To the south of our region it occurs in eastern and southern California and in the Intermountain region.

This species feeds primarily on bitterbrush (Purshia tridentata) in the Rosaceae along the east slope of the Cascades, but it probably feeds on other xeric shrubs in southwestern Oregon.

This winter moth emerges in the fall and overwinters as an adult. They emerge during warm weather in the spring. Most moths are found from March through April. They are nocturnal and come to lights.