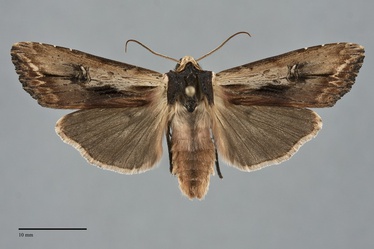 Xylena nupera is a large, brown, tan, and whitish gray moth (FW length 22–28 mm) that flies throughout much of the Northwest during late fall and early spring. It has black basal and median dashes and a similar mark extending distally from the lower reniform spot. The forewing is relatively long, pointed, with a scalloped outer margin. It is longitudinally streaked, dark brown on the costa, on the posterior third, and in the terminal area, tan on most of the anterior wing, and whitish gray on the mid-wing to the end of the cell. Diffuse brown and black basal and diffuse black median dashes are present. A similar black dash extends from the reniform spot through the subterminal area above vein M3. The distal veins are dark, thickest in the terminal area. The antemedial line is double, thin gray and brown, very strongly zigzagged but very faint except on the posterior wing. The median line is absent. The postmedial line is a series of small dark spots on the veins. The subterminal line is pale yellow-tan, diffuse and irregular with a strong offset below the apex and a W-mark to the outer margin on M3 and CuA1 on the mid-wing. It is preceded by a brown shade and the single long dash-like black mark described above. The fringe is dark gray-brown, often checkered with tan. The orbicular spot is absent or reduced to a few black spots or line. The reniform spot is double black, often open at the anterior and posterior ends, elongate, kidney-shaped, filled with light tan or whitish gray. No claviform spot is evident. The hindwing is medium-dark brownish gray with a slight pink sheen. Barely darker gray discal spot and darker thin terminal lines are present. The fringe is off-white, often pink. The head and base of the collar are ochre-tan with dark bands across the face and tip of the collar. The posterior thorax is blackish brown with whitish lateral tegulae at the wing bases. The male antenna is biserrate.

This moth can identified by its tan and brown color, streaked pattern, and three dark dash-like marks. It is most similar to Xylena curvimacula which is ochre and gray-brown and has a basal dash. It lacks the median and subterminal dark dashes of X. nupera and has a distinct black orbicular spot that X. nupera lacks.

This species is common across much of North America in moist forest, riparian, and even disturbed agricultural habitats.  In the Pacific Northwest, it is most frequent west of the Cascades at low elevations in mixed hardwood forests and along creeks and rivers, but also occurs in agricultural and urban areas.  East of the Cascades, it also occurs in a variety of situations ranging from riparian habitats, marshes, mixed hardwood-conifer forests, sage steppe, and agricultural areas at low to middle elevations.  It is rare at high elevations in the Cascades and Rocky Mountains.

Xylena nupera is widely distributed on both sides of the Cascade Mountains, occurring north to Vancouver Island west of the mountains and to south-central British Columbia on the east side. It ranges from the Pacific Shore to arid interior steppe regions further south in Washington and Oregon. It has only been found in the northern part of Idaho.

This species is widespread in North America. It occurs in California and Nevada near the West Coast, and from central Alberta to Utah and Colorado in the Rocky Mountain and western Great Plains regions. The range extends east to the Atlantic in the boreal forest region of  Canada and the northern United States. The range extends from Hudson Bay to Minnesota in the mid-Continent and from Nova Scotia to the District of Columbia near the Atlantic Coast.

This species is a very broad generalist feeding on many kinds of hardwoods, herbaceous plants, and even grasses.  It appears to show a preference for feeding on hardwoods of the rose family (Rosaceae).

Adults of X. nupera emerge during the fall and overwinter. They fly again in the spring and are most commonly collected from mid-March through May. Fall specimens have been found from late August to late October in the Northwest. This species is nocturnal and comes to lights. It can also be collected at sugar bait, although this has limited effectiveness in the Northwest.