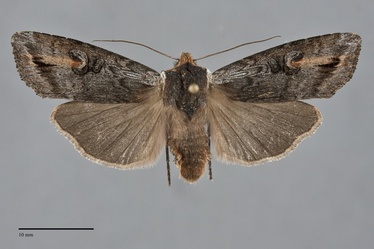 Xylena thoracica is a medium-sized to large, streaky blue-gray moth (FW length 19–23 mm) that flies in forests and forest-steppe ecotone during late fall and early spring. It has a brown-gray costa and pale ochre-yellow streak distal to the large double orbicular and reniform spots. The forewing is relatively long with a slightly pointed apex; the outer margin is weakly scalloped in a few specimens. The ground color is powdery blue-gray, almost like a waxy bloom on fruits and berries, darker gray along the trailing margin and dark brown-gray on the costa. A pale ochre streak, often with a small amount of proximal red, extends from inside the reniform spot to the terminal area. The anterior wing base and apex are streaky whitish gray. A black spike-like wedge in the subterminal area is located above vein M3 at the posterior edge of the ochre streak. The antemedial line is double, gray, faint, strongly looped and zigzagged. A diffuse brown-gray wavy median line is faintly visible on the posterior wing in a few specimens. The postmedial line is reduced to small dots on the veins. The subterminal line is light gray, light ochre at the streak, diffuse and waved, nearly parallel to the the margin. It is preceded by the aforementioned black spike and a wavy brown-gray shade. The fringe is dark brown-gray. The orbicular spot is an upright or slightly tilted hourglass-shape, less often oval, completely outlined in black, double, filled with the gray ground, positioned close to the reniform spot. The reniform spot is large, asymmetrically boomerang-shaped with a larger anterior end, outlined in double black medially and inferiorly, is open anteriorly, and is more diffuse gray and red laterally. It is filled with light gray to ochre. No claviform spot is evident. The hindwing is medium-dark gray with a pink tint in fresh specimens. A thin dark terminal line is present at the base of the off-white to pink fringe. The head is tan with a dark face. The base of the collar is striped brown and tan and the edge is dark gray to glaucous gray. The rest of the thorax is dull dark gray in western populations, with whitish gray on the anterior tegulae at the wing bases. The male antenna is biserrate.

This species can be recognized by its streaked blue-gray wing with pale yellow streak at the end of the reniform spot. It is most similar to Xylena cineritia, a more common moth in our area. Xylena thoracica is lighter blue gray, streakier, with a less warm color. The thorax of X. thoracica is dark gray rather than brown-black, and its orbicular spot tends to be larger with a pronounced waist rather than oval as in most specimens of X. cineritia.

This species is widely distributed across North America, usually in moist forest habitats.  In the Pacific Northwest, it is common at middle to high elevations in the Cascades and Rocky Mountain regions in cool, wet mixed hardwood-conifer forests. A few specimens have been taken in drier forests near the forest-steppe ecotone and even in open steppe in the Columbia Basin.

Xylena thoracica is found east of the Cascade and Coast Mountain divides in central and southern British Columbia, eastern Washington, and northeastern Oregon. It occurs southward through the Oregon Cascades at higher elevations.  An isolated record exists for the Wasatch Mountains of southeastern Idaho. Xylena thoracica is almost certain to be found in northern Idaho and western Montana.

This is a predominantly boreal forest species that occurs across North America from Alaska to the Canadian Maritime Provinces. The range extends south into the northern Great Lakes region at mid-Continent and northern New England in the East. This species is found from northern Alberta to Colorado in the Rocky Mountains. A seemingly disjunct population occurs in the Sierra Nevada of California.

This species may be a generalist feeding on various hardwoods like related species.  In the Pacific Northwest, however, larvae have only been collected on snowbrush (Ceanothus velutinus) in the Rhamnaceae.

The adults of X. thoracica emerge from pupation in the fall and overwinter, flying again on relatively warm spring nights. They have been collected most commonly from mid-March to mid-May in the Northwest. This species is nocturnal and comes to lights.