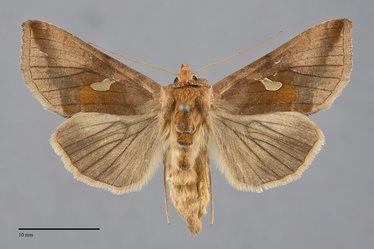 Autographa metallica is a distinctive, medium-sized (FW length 19 - 20 mm) warm fawn-colored moth that flies in forests during the summer. It has a solid gold stigma on the mid-forewing. The forewing has a pointed apex and a flange at the anal angle. Most of the wing is dull brown, with velvety golden brown on the median area posterior to the stigma and at the anal angle. The distal wing has a distinct green iridescence. The terminal area is darker gray-brown, darker and warmer brown near the apex. The stigma is foot-shaped and solid shiny gold in color. The antemedial line is brown, double filled with the ground color, evident as the oblique transition to the warm median area. The postmedial line is also faint, evident as a sinuous thin light line near the trailing margin. The subterminal line is the transition from dark to light. It is slightly irregular, with a weak "W" mark with teeth below veins M2 and M3. The fringe is similar to the terminal area. The spots are absent, although the anterior reniform spot is sometimes visible as a thin brown line. The hindwing is warm gray-brown with gray suffusion toward the margin. The veins and terminal line are darker gray. The hindwing fringe is pale tan, sometimes with a pink tint. The head and thorax are reddish tan, grayer laterally. The male antenna is filiform.

This species can be identified by its warm brown color and thick gold stigma. Other species of Plusiinae with brown wings and gold-colored stigmas have a different shape to the stigma.

The type locality of the synonym Plusia scapularis Hy. Edwards is Washington Territory, USA and that of the synonym Phytometra metallica ab. kasloensis Strand is Kaslo, British Columbia, Canada.

Autographa metallica is found in forests throughout our region as far north as southern British Columbia. It is absent from the most xeric habitats.

No information is currently available regarding larval foodplants, but it probably feeds on herbaceous vegetation like other species in the genus.

This species has a single brood that flies during the summer from early June through August. It is nocturnal and comes to lights.