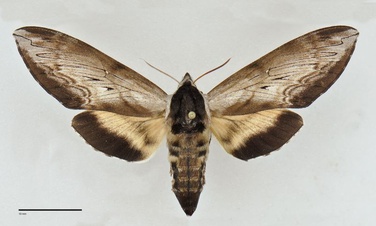 Sphinx luscitiosa is a sexually dimorphic large to very large sphinx moth (FW length 22–26 mm, 31–37 mm in females) that likely occurs in northeastern British Columbia and southeastern Idaho and flies during late spring and early summer. In males, the forewings are dark gray-brown and the hindwings are yellow and black. In females, the forewings are blue-gray and the hindwings are tan and black. Males have long narrow forewings that are smooth brown with dark veins and a few longitudinal streaks on the mid-forewing, darker brown at the base and costal margin, and black at the outer margin. That of the female is slightly broader, normal in shape for the genus. It is pale yellowish gray, darker brown gray on the costa and posterior margin with a black terminal area. Squiggly double subterminal lines are present near the margin, but most transverse markings are obsolete. A few short dark V-shaped or Y-shaped lines are present in the median area between the proximal branches of the cubital vein. The hindwings of both sexes have solid black marginal bands and white fringes but differ in ground color. That of the male is dark ochre-yellow with gray basal suffusion. That of the female is lighter and duller yellowish gray-tan with a diffuse gray postmedial line. The thorax and top of the head are black-brown while the sides of the head and lateral tegulae are light gray. The abdomen is yellow-brown with longitudinal black stripes. The antenna is club-like.

Both sexes of this moth can be readily identified by the solid black outer margins of both wings and the yellowish ground color of the hindwings. This species should only be expected in northern British Columbia, eastern Idaho, and western Montana.

This moth occurs in boreal forest in most of its range and riparian areas in the western mountains (Tuttle 2009).

The projected range of this species includes the northeastern corner of British Columbia (Tuttle 2009). We have not examined any Pacific Northwest specimens, but agree that is likely to exist both in British Columbia and in southeastern Idaho given its known distribution.

This is predominantly a boreal forest moth that is found from southern Yukon Territory, possibly central Alaska, to Nova Scotia across central and southern Canada. The range extends south to central Illinois in the Midwest and Pennsylvania and New Jersey near the Atlantic Coast. It also extends south in the Rocky Mountains to Colorado and northern Utah.

The flight period of this moth across most of its northern distribution is June and early July. A record from Utah is from mid-May. The males are diurnal and crepuscular and are rarely taken at light, while females are crepuscular and nocturnal and can be collected at lights. Tuttle (2009) cites a number of nectar sources, including honeysuckle (Lonicera spp.), ornamental lilac (Syringa ssp.), and dandelion (Taraxacum spp.). Ferguson (1971) notes that this species has been attracted to bright clothing.