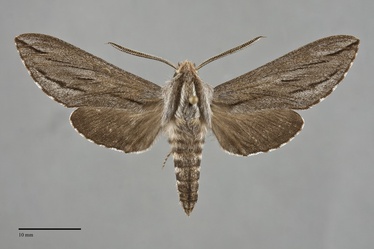 Sphinx sequoiae is a relatively small and dark Sphinx (FW length 24–26 mm); only Sphinx dollii is smaller. Like S. dollii it has uniform gray hindwings with a weakly checkered white fringe. The forewing is somewhat stubby for a sphinx moth, but the apex is pointed and the trailing margin is slightly concave as is typical for the genus. The color is slightly uneven powdery ash gray. It is marked with several longitudinal black dashes that are associated with lighter gray scaling; these marks are strongest at the base and from the mid-forewing to the apex. The posterior subterminal line forms a similar black and gray mark above the anal angle. The other transverse lines and the discal spot are absent. The fringe is checkered dark gray and white. The thorax is medium gray with lighter gray lines next to the black medial tegulae, appearing longitudinally striped. The abdomen is brownish medium gray, barred dorsolaterally with black and light gray. The antenna is club-like.

This species is most likely to be confused with Sphinx vashti and S. dollii. Sphinx vashti is larger and has a black and white hindwing. The subterminal line of its forewing is smoothly curved, in contrast to the slightly uneven subterminal line of S. sequoiae. Sphinx dollii, which is restricted to southern Idaho in our region, has a long dark mark from the wing base to the apex unlike the separate basal and apical dashes of S. sequoiae.

The larva is green with mottled white and brown patches and a caudal horn. It is illustrated by Miller & Hammond (2003).

Sphinx sequoiae is found in southwestern and central Oregon. The central Oregon records are from the Ochoco and Blue Mountain regions.  It has not been collected in the southeastern part of the state despite the fact that one of its food plants, western juniper (Juniperus occidentalis), grows commonly in this area.

Sphinx sequoiae occurs in California as well as in the Pacific Northwest.  Its range in California is west of the Sierra Nevada crest.

This species is a foodplant specialist feeding on various members of the Cuppressaceae, including incense-cedar (Calocedrus decurrens) west of the Cascades and western juniper (Juniperus occidentalis) east of the Cascades.

Adults are single brooded and occur from late May through July in our region.  They are nocturnal and come readily to light.