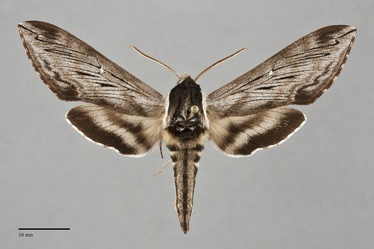 Sphinx poecila is a very large Sphinx (FW length 32–40 mm) that is reported to enter our range in eastern British Columbia. The forewing is long and pointed, typical for the family, and the hindwing is smaller and oval. The forewing is mottled light to medium-dark slightly brownish gray, darkest gray at the anal angle, apex, and outer margin. Several of the black dashes between veins are sideways V-shaped or form tight loops and most of the veins are finely black giving it a streaked appearance. The fringe is checkered brown-gray and off-white. The discal spot is small, white. The hindwing is obliquely banded with light tan-gray and dark brownish gray with a weakly checkered white fringe. The thorax is black-brown with light gray at the lateral tegulae and light gray and black weak tufts at the base of the abdomen. The dorsal abdomen is banded brown gray and black, and the sides are banded tan and black. The antenna is club-shaped.

This species can be distinguished from other sphinx moths by the combination of its white discal spot, finely streaked forewing, and brown-tinted banded hindwing and abdomen. A white reniform and brown coloration are also found in Ceratomia amyntor, but this species has a predominantly brown hindwing with a strongly checkered fringe and does not occur in British Columbia.

The habitat of this species in the Pacific Northwest is unknown.

Sphinx poecila is primarily a species of eastern and central Canada where it is often common. The range extends from Labrador to northeastern Alberta in the north. The southern range extends to southern New England, New York, and the states bordering the Great Lakes. The range is incompletely known due to confusion with Sphinx gordius, with which this species was confused until recently (Tuttle 2007). However, this moth is more exclusively eastern and does not approach the Pacific Northwest.

Southeastern British Columbia is included in the range shown for this species by Tuttle (2007). No Pacific Northwest specimens were found in the collections databased for this project.

Adults are reported as single brooded by Tuttle (2007), with a flight from late May to July. They are nocturnal and come to light and also nectar at flowers.