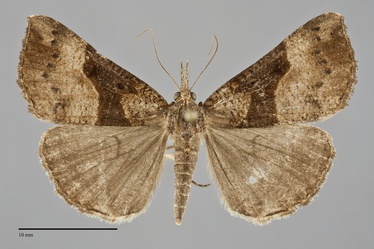 Hypena edictalis is our largest Hypena species (FW length 17 - 18 mm), but barely enters northeastern British Columbia. The forewings are triangular in shape, with a slightly scalloped outer margin that has a slight concave margin below the apex. The ground color is dull gray-brown, speckled with brown and variably shaded with dark near the lines and outer margin. The median area or entire wing basal to the postmedial line are dark brown in some individuals. The antemedial and postmedial lines are similar, predominantly pale with segments of the outer parts thick blackish brown. The antemedial line is pointed sharply toward the wing base in the cell. The anterior postmedial line is straight and oriented perpendicular to the costa, with the portion posterior to the reniform spot smoothly concave toward the base. The subterminal line is variable, typically a series of large smudgy gray spots. The orbicular and reniform spots are both blackish brown. The hindwing is uniform gray with a faint discal spot and a thin dark terminal line at the base of the fringe. The palpi are very long, as long as the thorax. The male antenna is ciliate; that of the female is simple.

This species can be identified from other brown moths by its long palpi, large size for the subfamily, and dark orbicular and reniform spots.

This is a species of eastern hardwood forests. The British Columbia record for this species is from a riparian cottonwood (Populus balsamifera) forest.

Hypena edictalis has been found along the Peace River in British Columbia near the Alberta border. It is not known from elsewhere in our region.

This species is primarily found in eastern North America. It occurs from Quebec to Virginia in the east, and ranges through central Alberta to extreme eastern British Columbia.

No information is presently available regarding foodplants of this species.

The single British Columbia record is from mid July. In the East it flies from late June to early August. The moth is nocturnal and comes to light.