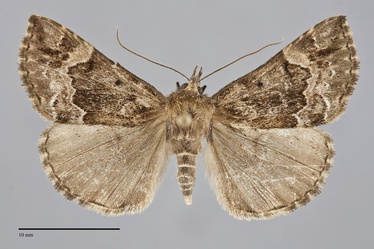 Hypena palparia is a mottled brown moth with moderate sexual dimorphism. It is small to medium-sized (FW length 13 - 16 mm) with triangular forewings. The ground color is somewhat mottled dark brown. The area distal to the postmedial line are slightly lighter brown in males and light whitish brown in females, mottled with blue gray and darker brown in both sexes. The antemedial line is irregular, pointed toward the outer margin near the posterior margin. The postmedial line is irregular, usually with a tooth-like lateral projection at the lower end of the cell. The subterminal line is pale and irregular in shape, often with a series of dark gray dots along it. The orbicular spot is black and distinct, while the reniform spot more obscure. Additional black marks are present, a black bar distal to the subterminal line opposite the cell being the most prominent. The hindwing is dark gray-brown in males and light yellow-gray in females. The palpi are moderately long. The male antenna is ciliate, while that of the female is simple.

This species is most likely to be confused with Hypena abalienalis in our region. The species has a more uniform dark brown median area and a much smoother postmedial line than H. palparia.

Hypena palparia is widely distributed in forests of southern British Columbia and the western portions of Oregon and Washington. Apparent absence from Idaho probably reflects undersampling since this species is known from the Rocky Mountains.

This species is found across North America. It is widely distributed in the East, occurring from Nova Scotia to Florida and Texas.

This species is on the wing during the summer months. Adults have been collected from early June until mid August. It is nocturnal and comes to lights.

This species feeds on various hardwoods such as oaks (Quercus spp.) in the Fagaceae.