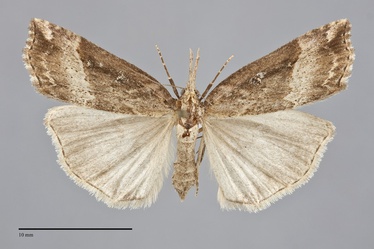 Hypena modestoides is a small moth (FW length 16 - 17 mm) with elongate wings that have a slight falcate (hook-shaped) apex. The forewing is mottled medium brown, much lighter brown lateral to the postmedial line and sometimes along the posterior margin. A triangular patch of light yellow-brown is present at the apex, accentuated by a dark gray-brown mark below it at the outer margin. The antemedial and postmedial line are serrate, especially near the posterior margin. The postmedial line is oriented obliquely across the forewing, meeting the costa further from the base than the posterior margin. The pale subterminal line is irregular but not strongly so. As in H. californica the orbicular spot and reniform spot are comprised of patches of raised scales and appear as black dots. A third patch of raised scales is present at the wing base. A black bar spans the orbicular and reniform spots in some specimens. The broad hindwings are light yellowish gray with gray speckling, a faint discal spot and postmedial line, and a thin terminal line at the base of the fringe. The palpi are very long and laterally flattened. The antennae are simple in both sexes.

This species is most similar to Hypena californica, which has identical wing shape. The ground color of H. californica is more even glossy brown, and it lacks the pale areas beyond the postmedial line and at the apex of H. modestoides. Hypena modestoides also resembles some specimens of Hypena humuli, but this species has a slightly broader forewing without a hooked tip. In addition, the postmedial line of H. humuli is projected laterally near the reniform spot whereas that of H. modestoides is nearly straight in this location.

Hypena modestoides resembles H. californica in all but color and might be a form of this species. Elucidating the relationship of these moths using rearing or DNA sequencing would be an interesting exercise.

The habitat of this species is poorly known, but probably includes riparian forest habitats along creeks and rivers.

This species is found in forests of western Oregon and Washington, and eastern Washington in our area. The range is not well known due to confusion with H. californica.

This species was described from Vancouver Island. It probably has a similar West Coast range as that of H. californica.

The larva is unknown, although it is likely that it feeds on nettle (Urtica sp.) in the Urticaceae like H. californica.

Adults have been collected in spring and August suggesting the presence of spring and summer broods. It is a nocturnal species and comes to light.