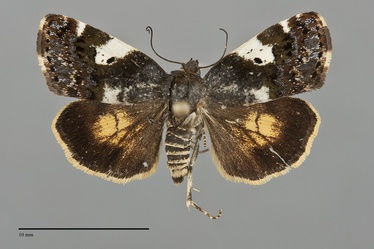 Tarache flavipennis is a small stubby-winged black and white moth (FW length 10 - 11 mm) that flies in arid habitats in southern Oregon during the summer. It has white patches along the costal forewing margin and a yellow and black hindwing. The forewing ground color is white, although the wing is extensively covered with dark gray-brown. The wing base is patchy off-white and gray, usually light in the posterior median area that extends to the mid wing base. The most of the rest of the wing is dark gray-brown, except a rhomboid pure white patch in the anterior median area that surrounds the black punctate orbicular spot and the medial portion of the bar-like reniform spot, a bar-like white spot on the costa in the subterminal area, and the irregular pale subterminal line. Patches of black metallic black scales form portions of the postmedial line and precede the subterminal line. The terminal line is a series of black spots. The fringe is gray-brown with a white spot in the midwing. The hindwing is bright ochre yellow at the base, with a blackish gray band at the costal and outer margins, a dark discal spot, dark veins, and a two-toned gray and ochre fringe. The head and body are mottled gray. The male antenna is filiform.

The forewing markings of this species are nearly identical to those of Tarache knowltoni, a more widespread species in arid environments of the Pacific Northwest, but is easily separated from it by the color of the hindwing. The central hindwing is white in T. knowtoni, rarely all dark gray, and yellow-orange in T. flavipennis. These species have been considered to be color forms of the same species, but differ in the number of cornuti (spines) on the vesica of the male aedeagus.

This species occurs in dry, open grasslands at low to high elevations in California and southwestern Oregon, including the southern Cascades, Siskiyou Mountains, and Warner Mountains.

Tarache flavipennis is only found in southwestern and south-central Oregon in our area where it flies in the Siskiyou, Cascade, and Warner Mountains.

The range of T. flavipennis is restricted to California outside of the Northwest. Records from the USNM (nearctica.com) show the distribution to include most of northern California as well as the Sierra Nevada. It is replaced by Tarache lagunae in southern California.

No information is presently available regarding larval foodplants of this species, but it may be a foodplant specialist feeding on Malvaceae based upon related species.

This species flies during the summer. Records from California are from June and July. The moth is diurnal and seeks nectar at flowers during the day.