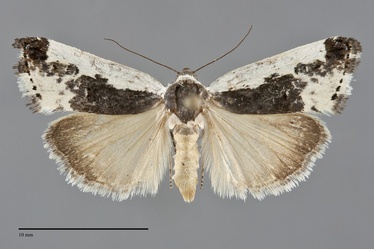 Tarache major is a widespread but rarely collected, small (FW length 13 mm), white and dark gray moth that flies in steppe and dry forests throughout most of our region during the summer. It has a yellowish hindwing and the ground color of the forewing is pure white. The lower half of the wing medial to the postmedial line is dark gray. The apex is similar gray. The areas are connected by gray mottling through the region of the reniform spot. In most individuals the costa is white, although portions of the gray antemedial and postmedial lines can be evident, the latter as a gray bar. The subterminal line is pale, preceded medially by a few dark spots which form the only marking in the white patch at the anal angle. The spots are dark but subsumed by the surrounding gray markings. The terminal line is a series of dark gray lines. The fringe is mottled gray and white. The hindwing is yellow-gray, darker gray toward the margin, with a two-toned gray and white fringe. The head is gray. The collar is white and the rest of the thorax is gray. The male antenna is filiform.

This species is widely distributed throughout much of western North America on arid grasslands and rangelands.  In the Pacific Northwest, it occurs in dry meadows at high elevations in the mountains and on open sagebrush steppe at low elevations. It is usually rare.

Tarache major has a spotty distribution in the Northwest. It has been found most commonly in the Selkirk Mountain region of southern British Columbia. It has been found near Wenatchee in central Washington, at Wallace in the Idaho Panhandle, in western Montana, and in eastern and south-central Oregon.

The distribution of this species encompasses most of the western United States and adjacent southern Canada, but only a few records are shown for most states and provinces. The range outside the Pacific Northwest includes extreme south-western Alberta, Colorado, Utah, Arizona, and most of California. Based on the records shown on The Moth Photographers Group website and from the USNM at nearctica.com, this species is most common in California.

This species feeds on Malvaceae such as Sphaeralcea spp. on dry grasslands.

Tarache major flies during the summer and has been collected in June and July in our area. It is nocturnal and comes to lights.