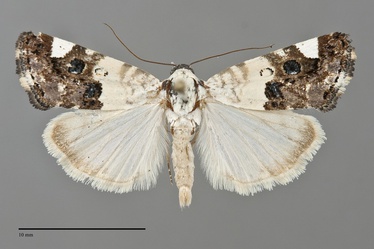 Tarache toddi is a small (FW length 10 - 12 mm) moth that flies in arid environments of eastern Oregon and southern Idaho during the summer. It has forewings that are white on the basal half and gray-brown on the outer half, and are marked with a white patch on the distal costa and an oval iridescent blue-gray reniform spot. The forewing ground color is slightly cream colored, nearly pure white. The wing distal to the median line is mottled dark gray-brown except for a pure white preapical patch at the costa in the subterminal area. The basal and antemedial lines are light gray and double. The anterior median and postmedial lines are similar gray at the costa; a patch of black and metallic blue-gray scales are present on the fused median and postmedial lines in the fold. The subterminal line is cream, most evident posterior to the cell. It is preceded by two black spots near the apex. The terminal line is a series of black spots. The fringe is dark gray with several cream patches, largest at mid-wing. The orbicular spot is round or oval, black and incomplete, evident only as the medial and lateral portions. The reniform spot is round, black, and filled with metallic blue-gray scales. The claviform spot is absent. The hindwing is whitish gray with a sheen, slightly darker gray near the outer margin, white a white fringe. The top of the head is black. The thorax is white. The male antenna is filiform.

This species is similar to Tarache areli, which is found in the eastern part of the Pacific Northwest. Both of these species can be told from other members of the subfamily Acontiinae by the incomplete black orbicular spot marking the pale basal half of the forewing. The ground color of T. areli is whitish tan, not white as in T. toddi. T. areli also has a black dot in the reniform spot that is lacking in T. toddi. Ponometia sutrix is also similar in size, color, and general distribution of the wing markings and has a similar range and habitat preference to T. toddi. The medial border of the dark area on the distal wing extends across the wing from trailing margin to the costa in T. toddi but not in P. sutrix. This species also lacks the blue metallic scales that are present in the reniform in T. toddi.

This species is widely distributed in arid desert regions of western North America.  In the Pacific Northwest, one or both occur in dry grasslands and sagebrush steppe at low elevations east of the Cascades.

Tarache toddiis found in eastern Oregon and southern Idaho in our area.

Tarache toddi is predominantly a species of the Intermountain Region and the Southwest. It has been collected in the central and southern portions of Nevada and Utah, southern California, most of Arizona, southern New Mexico, and west Texas. Isolated records from the Great Plains are shown for Montana and Wyoming in the species description (Ferris & Lafontaine 2009).

This species is probably a foodplant specialist feeding on Malvaceae such as Sphaeralcea spp., but this is confused with the closely related T. areli.  Foodplant records may apply to both species.

This species flies during the summer and probably has two broods in our area. Most of the records are from June, but it has also been collected in July and September. It is nocturnal and comes to lights.