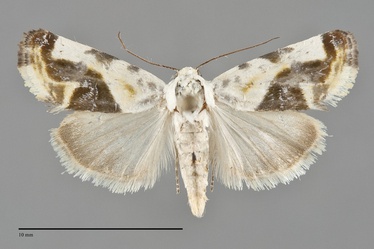 Tarache arida is a very small to small (FW length 9–10 mm) white moth that occurs in southern Oregon during the spring. It is marked with olive-gray, brown-gray, and ochre on the distal half of the forewing. The ground color is nearly pure white with a slight warm cast. This is present across the wing to the median line and curves to an abrupt terminus just medial to the subterminal line near the apex. The posterior two-thirds of the median and subterminal areas are dark olive-gray, the medial and anterior portion of which forms a smooth 90 degree arc against the white base and costa. This dark areas is defined laterally by the pale subterminal line which is undulating and nearly parallel to the outer margin from the costal margin to the fold where it is drawn sharply toward the base to the lower reniform spot and then turned to angle toward the anal angle. A gray-brown spot is present at the apex of the wing. The remainder of the terminal area is ochre to light olive and white. The terminal line is absent or faint. The fringe is gray at the apex and anal angle and white in between. Patches of olive and ochre are present at the wing base as vestiges of the basal and antemedial lines. The antemedial and median lines form olive bars on the costa, largest and most consistently present at the median line. The postmedial line is purplish gray, but obscure against the adjacent dark olive. The reniform spot is similarly obscure, and the orbicular and claviform spots are absent. The hindwing is slightly yellowish pale gray, darker gray toward the margin, with a pale fringe. The head and thorax are white. The male antenna is filiform.

This species can be identified by its small size, white forewing base and costa that ends abruptly near the apex, and smoothly curved green and yellow dark patch on the distal wing. It is most likely to be confused with Ponometia binocula, a species that is restricted to the eastern part of the Northwest. P. binocula has a round reniform that is filled with gray and the forewing fringe is gray at the base near the anal angle. The reniform of T. arida is more diffuse and is difficult to identify and its fringe is pure white on the posterior half of the forewing.

This species is widely distributed on arid sagebrush steppe throughout much of the Great Basin and may be locally common.

Tarache arida has been recorded from southern Harney County, Oregon. It might be more widespread in south-eastern Oregon and southern Idaho, areas that have been collected poorly during the spring flight of this species.

The range of T. arida is centered over Arizona, southern Nevada, and southern California, with scattered records for Utah and Colorado (nearctica.com). The closest record to the Pacific Northwest is from the vicinity of Salt Lake City, Utah.

No information is presently available regarding larval foodplants of this species, but it probably feeds on Malvaceae like related species.

This species flies during the late spring and early summer and again in the fall across its entire range. However, it has only been collected during May in the Pacific Northwest. It is nocturnal and comes to lights.