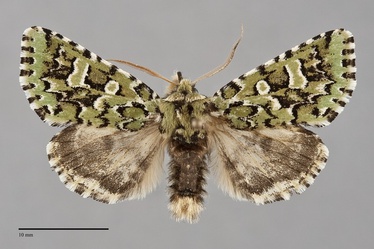 Feralia comstocki is a green, medium-sized noctuid moth (FW length 16 - 18 mm) that flies in forests throughout most of our region in early spring. It has a round orbicular spot, black suffusion in the median area, and a mottled hindwing. The forewing has a less pointed shape than in our other Feralia species. The color is dark yellow-green to apple green. The median area is heavily suffused with black, most prominently in the cell, distal to the reniform spot, and in the fold. The basal, antemedial, and postmedial lines are double, black, with white filling. The antemedial line is strongly irregular, bulging laterally between the veins. The postmedial line is strongly scalloped. It is drawn sharply toward the base at the costa, has a long transverse segment that approaches the outer margin at mid-wing, and is oblique to the trailing margin. The median line is obscured by the black suffusion and is usually evident as a short line at the costa. The subterminal line is absent, although the position is marked by a black wedge on the costa. The terminal line is a series of white and black lunules between the veins. The fringe is checkered black and white. The spots are outlined in black and white and are filled with the ground color. The orbicular spot is round. The reniform spot is figure-eight or weakly kidney-shaped and is open to the costa. The claviform spot is moderate size, usually only evident as the lateral portion. The hindwing is pale tan, whitish gray, sometimes with a green tint along the outer margin. It is mottled with gray suffusion that forms a thin postmedial line, a wide submarginal band, and in some individuals traces of an antemedial line. A diffuse discal spot and thin terminal line are also present. The fringe is checkered with gray. The head and thorax are green and black. Black markings include the frons, a line across the head, lateral and median spots on the collar, weak tufts posterior to the collar, and edges on the tegulae. The vestiture of the dorsal abdomen is normal, without spines. The male antenna is moderately bipectinate.

This species resembles our other Feralia species. It can be identified by its stout forewing shape, black suffusion in the median area, round orbicular spot, and strongly mottled light and dark hindwing.

Feralia comstocki is found in moist conifer forests throughout most of the Pacific Northwest. It is more common in the northern part of our region than in the south. The southern limit appears to be the Blue Mountains in eastern Oregon, and possibly northern California along the West Coast. This species is probably more widespread in northern and central Idaho than current records suggest since this is a poorly sampled area.

The range of F. comstocki extends east to the Atlantic in the boreal forest region. Most records are from a narrow north-south zone near the Canada-United States border. The limits of the distribution are northern Newfoundland and New York along the Atlantic Coast, but the range extends south to northern Georgia in the Appalachian Mountains. It does not occur in the Rocky Mountains south of Idaho.

This species flies in early spring. Most records from the Northwest are from April and May. It is nocturnal and comes to lights.