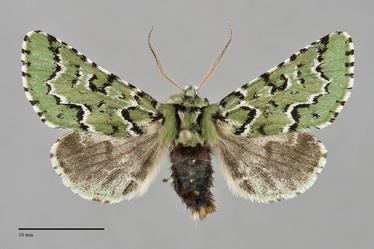 Feralia deceptiva is a medium-size (FW length 18 - 19 mm), smooth blue-green moth that flies in conifer forests in the western part of the Northwest during early spring. It has black and white markings and a dark hindwing. The green forewing color lacks black suffusion except along the veins in the cell, lateral to the reniform spot, and a black patch at the costa in the subterminal area. The basal, antemedial, and postmedial lines are black, double, with pure white filling. The black components of the antemedial and postmedial lines abutting the median area are weak. The antemedial line is moderately irregular with a convex loop toward the outer margin in the cell. The postmedial line is strongly scalloped, sharply drawn toward the base a the costa, toothed toward the outer margin near the lower reniform spot, and oblique to the trailing margin. The subterminal line is absent. The terminal line is a series of black dots between the veins. The fringe is checkered with alternating black and green basal and white distal segments. The spots are have outer black and inner white outlines and are filled with the ground color. The orbicular spot is oval. The reniform spot is hourglass-shaped with open anterior and variably open posterior ends. The claviform spot is weak and incomplete, usually only black near the apex and absent elsewhere. The hindwing is smoky dark brown-gray, often green near the anal angle, with faint dark discal spot and postmedial line. The hindwing fringe is checkered tan or green and gray. The head and thorax are green and black. Black parts include the frons, the head between the antennae, the lateral and median collar, portions of the medial and lateral tegulae, and weak tufts on the anterior central thorax. Portions of the tufts are white in some specimens. The abdomen is blackish brown with tan or green posterior end. The male antenna is moderately bipectinae.

This species can usually be identified from other Northwest Feralia species by its smooth green ground lacking black suffusion and dark hindwing. It is our largest Feralia. Its sister species, Feralia jocosa, occurs in eastern and central British Columbia. Northwest populations of F. jocosa tend to be heavily suffused with black, have pale patches in the terminal area, and as a result appear strongly mottled. They tend to have wider black antemedial and postmedial lines and a more complete claviform spot containing more white scales than F. deceptiva.

Larva is smooth with a slight dorsal hump near the tail.  The color is green with subdorsal and lateral white lines and thin red lateral dashes.  It is illustrated by Miller & Hammond (2003).

Feralia deceptiva occurs in the western part of the Northwest from southwestern British Columbia to southern Oregon, predominantly west of the Cascade crest. It is less common to the east, but is found along the east slope of the Cascades and British Columbia Coast Ranges. Scattered records of this species from farther east have now been confirmed to be F. jocosa (Chris Schmidt personal communication 2015).

The range of F. deceptiva extends south to the San Francisco Bay region in California. The range includes the northern Sierra Nevada.

This species is a foodplant specialist feeding primarily on Douglas fir (Pseudotsuga menziesii) in the Pinaceae.

Feralia deceptiva is one of the earliest moths to emerge in the spring. It has been found in March and April. It is nocturnal and comes to lights.