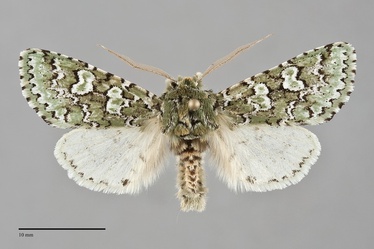 Feralia februalis is a beautiful, mottled seafoam green, medium-sized noctuid moth (FW length 16 - 18 mm) that flies in oak forests in western Oregon during the early spring. It has pale hindwings with outer margins that are strongly scalloped. The forewing ground color varies slightly from light to medium-dark blue-green, sometimes with an olive cast or dark suffusion from the base to the postmedial line. The lines are black, double with equal inner and outer components and white filling, and are very irregular. The postmedial line is strongly scalloped on the veins. A black median line is present. The subterminal line is black and white, incomplete, usually evident near the costal and trailing margins. The terminal line is white medially and black laterally, strong, and accentuates the scalloped margin. The fringe is green at the base with a checkered black and white edge. The forewing spots are outlined in black and white. The orbicular and claviform spots are large, are fused to each other and the antemedial line, and are filled with the ground color to pale whitish green. The reniform spot is large, hourglass-shaped, open toward the costa, and filled with similar scales to the other spots. The hindwing is slightly yellowish off-white with faint dusting of light gray scales, a powdery black terminal line, and white fringe. The eye is surrounded by black scales. The rest of the head and thorax match the green of the forewing with black transverse lines across the mid and apical collar, black and white margins on the tegulae, and weak black tufts on the anterior and posterior thorax. The dorsal segments of the abdomen are covered with spines like the quills of a hedgehog. The male antenna is broadly bipectinate.

This species can be distinguished from other Northwest Feralia species by its pale whitish hindwing and the quill-like covering of the dorsal abdomen.

Larva is smooth with a prominent dorsal hump near the tail.  The color is green with a thin red and white lateral line.  It is illustrated by Miller & Hammond (2003).

This species is narrowly endemic to the West Coast.  In the Oregon, it is common in oak woodlands and mixed hardwood forests with oaks at low elevations west of the Cascades.  This species is considered to be management sensitive, depending on oaks as a larval foodplant.

Feralia februalis is limited to western Oregon in our region. Its range extends north to the Columbia River but it has yet to be found in adjacent Washington.

The range extends south through California where it occurs in the western part of the state to the Mexican border. It is also present in the northern Sierra Nevada.

This species is a foodplant specialist feeding on oaks (Quercus spp.) in the Fagaceae.  In the Pacific Northwest, the primary larval foodplant is Oregon white oak (Q. garryana).

This species flies in very early spring, usually from February to April in our region. It is nocturnal and comes readily to lights.