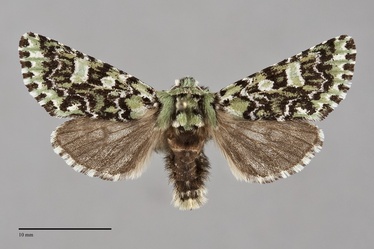 Feralia jocosa is a predominantly eastern species that occurs in the eastern part of the Pacific Northwest as far west as central British Columbia. It is a mottled green, black, and white medium-sized moth (FW length 14 - 16 mm) with a dark hindwing. The forewing has a slightly pointed apex and appears relatively long for a Feralia. The blue-green ground color is usually strongly suffused with black from the antemedial line to the medial subterminal area, and the terminal area contains white patches between the veins. A black patch is present medial to the position of the subterminal line on the costa. The basal, antemedial, and postmedial lines are black, double, and filled with pure white. The antemedial line is moderately irregular, undulating between veins. The postmedial line is strongly scalloped, sharply drawn toward the base at the costa, nearly straight across most of the wing to approach the outer margin above the fold, and then oblique to the trailing margin. The black median line is evident at the costa and near the trailing margin. The subterminal line is absent. A series of medial white and lateral black patches between veins forms the terminal line. The fringe is checkered green and black. The spots have black outer and white inner outlines and are filled with the green ground. The orbicular spot is oval. The reniform spot is wide, weakly kidney to hourglass-shaped, and open to the costa. The claviform spot is large, nearly touching the orbicular spot, but often incomplete near the antemedial line. The hindwing is dark brown-gray with faintly darker discal spot, postmedial line, and terminal line. The hindwing fringe is checkered light and dark gray. The head is green with black between the antennae and scales surrounding the eyes. The collar is green with black median and lateral spots at the base. Weak black and white tufts are present on the anterior and posterior thorax. Segments of the medial and lateral tegulae are black. The abdomen is dark brown. The male antenna is moderately bipectinate.

This species can be separated from Feralia comstocki, with which it flies throughout its range, by its dark hindwing and oval orbicular spot, mottled light and dark hindwing and round orbicular spot in F. comstocki. Feralia jocosa is most likely to be confused with Feralia deceptiva in south-central British Columbia where the ranges of these species approach. This species is larger than F. jocosa and is more even green in color, lacking black and pale mottling. The outer components of the antemedial and postmedial lines are thinner and better defined in F. deceptiva and its claviform spot is less evident, often reduced to a few black scales at the apex of the spot.

This species is widely distributed across Canada in moist conifer forests, and is probably most common in boreal spruce-fir forests.

Feralia jocosa reaches its western range limit in eastern and central British Columbia. It has also been found in Whitman County in eastern Washington. It is likely that it occurs in western Montana and in Idaho north of the Snake River plain.

The range of this species extends to the East Coast across southern Canada and the northern United States. It is found from Nova Scotia to Pennsylvania along the Atlantic, but reaches northern Georgia in the Appalachian Mountains. It does not occur in the Rocky Mountains south of Alberta and British Columbia.

This species is a foodplant specialist feeding on conifers (Pinaceae) including spruces (Picea spp.), hemlocks (Tsuga spp.), and true firs (Abies spp.). It may prefer balsam fir (A. balsamea).

Feralia jocosa flies in early spring. It has been collected in March to June in our region, with most records in April. It is nocturnal and comes to lights.