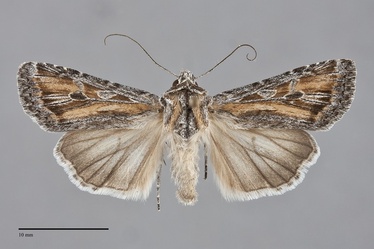 Euxoa pluralis is a distinctive, medium-sized Euxoa (FW length 15–18 mm) that flies in dry habitats during late spring and early summer. Its streaky, light orange and hoary gray forewing has a slightly pointed apex. The ground color is bright light to medium-dark orange-brown, lightest through the length of the fold and from the reniform spot through the subterminal area and darker burnt orange in the cell and between the veins in the mid-subterminal area. The costa is streaked gray and silver gray, the posterior margin and terminal area are suffused with powdery silver gray, and the cubital vein and its branches M3, CuA1, and CuA2 are gray bordered by light silver gray. The basal, antemedial, and postmedial lines are evident as dark and pale gray spots and are almost completely absent otherwise. A short segment of the anterior postmedial line is visiable as a pale curve in some specimens. The median line is also absent. The subterminal line is pale gray at the apex and light orange elsewhere, slightly irregular with an offset below the apex and a weak "W" mark on the mid-forewing. The terminal line is a series of black spots. The fringe is checkered gray. The orbicular and reniform spots are outlined in dark gray and lined by whitish gray. The orbicular spot is oval or diamond-shaped, usually filled entirely with pale or slightly darker gray centrally. The reniform spot is kidney-shaped, sometimes with a spike toward the base from the lower end, filled with darker gray than the orbicular spot. The claviform spot is gray, moderate-sized and thin, sometimes absent. the hindwing is light pearly gray with an ill-defined gray marginal band on the outer third in males; slightly darker with a wider band in females, with dark veins, discal spot, and terminal line. The hindwing fringe is white with patchy darker gray in the base and mid-portion. The head and thorax are striped light and dark gray and orange-tan, usually with a whitish collar base, darker banding on the mid and distal collar, and orange-tan medial edges on the tegulae. A frontal tubercle is present. The male antenna is biserrate with long fasciculations. Euxoa pluralis is placed in the large subgenus Euxoa.

This species is widely distributed in dry forest and rangeland habitats.  In the Pacific Northwest, it is very common in juniper woodlands and on dry open sagebrush steppe. It is found less commonly at higher elevations in open habitats such as ridgetops. In a study in central Oregon, E. pluralis was particularly abundant on heavily disturbed rangelands over-grazed by livestock during wet years, but was less common during droughts.  It was almost completely eliminated from sagebrush steppe that was burned over in a wildfire, while it was common in adjacent unburned habitat two years after the fire disturbance.  Thus, E. pluralis appears to benefit from grazing disturbance but not from wildfires.

Euxoa pluralis is found in the dry interior of our region from south-central British Columbia southward. The northeastern limit of its range is in eastern Idaho. It does not occur west of the Cascades.

The range of this species extends south to Wyoming, northern New Mexico, Utah, and southern California.

No information is presently available regarding larval foodplants of this species, but it is probably a soil-surface feeding cutworm that feeds on herbaceous vegetation based on related species.  This species was particularly abundant on heavily disturbed rangelands that were infested by small, annual weedy mustards (Brassicaceae).

Euxoa pluralis is usually found in early summer. The records from the Northwest extend from late May to early August. It is nocturnal and comes to lights.