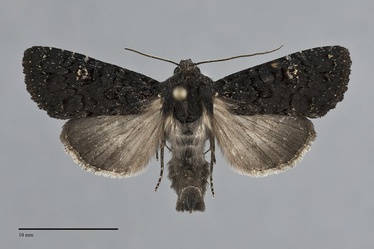 Melanapamea mixta is a medium-sized moth (FW length 15–18 mm) that flies in extreme southwestern Oregon during June. It has a nearly black forewing that appears mottled due to pure black markings, and its reniform spot has light yellow filling. The forewing has a slightly scalloped outer margin. The color is even slightly purplish black with as slight sheen, appearing black except for the fact that the lines and outlines of the spot are darker black. Several white spots are present on the costa distal to the median line. The antemdial line is zigzag, nearly perpendicular to the posterior margin. The median line is perpendicular to the costa between the spots, then offset lateral to run parallel to the distal postmedial below the reniform spot. The postmedial line is scalloped, drawn to the base on the costa, weakly excurved around the cell, and curved to meet the posterior margin at a right angle below the reniform spot. The subterminal line is pale but very spotty, usually evident near the apex. It is preceded by an incomplete black shade. The terminal line is black, thin. The fringe is black with small yellow spots on the base at the tips of the veins. The orbicular spot is round or slightly oval, filled with the ground color. The reniform spot is kidney-shaped, filled peripherally with light yellow and centrally with a powdery black crescent. The claviform spot is small. The hindwing is smoky gray with slightly darker reniform spot, thin dark terminal line, and dark gray fringe. The head and thorax match the forewing. The male antenna is weakly biserrate, bead-like.

This species can be identified in its limited range by the combination of black forewings and yellow-filled reniform spot. It is most similar to Apamea impulsa, a species that occurs in British Columbia and northern Washington. These species can be distinguished by locality. It lacks the small pale spots at the base of the fringe that are present in M. mixta, and also differs in other slight details of the forewing maculation that are described by Mikkola et al. (2009). Apamea plutonia is found in coastal Oregon. It is dark blackish brown and has a black spot in the posterior subterminal area that is lacking in M. mixta. Aseptis fannatica flies with M. mixta and is nearly pure black on the forewing. It lacks the yellow scales in the reniform spot typical of Melanapamea. Melanchra pulverulenta is also nearly black, but it has a white spot near the anal angle that is absent in M. mixta. Its eyes are also covered with fine hairs, unlike members of the tribe Apameini.

This species is widely distributed in moist forests of eastern North America, but a highly disjunct population occurs in mixed hardwood-conifer forests of northwestern California and southwestern Oregon. It also occurs on rocky serpentine barrens in Josephine County. It is a rarely collected moth in the Pacific Northwest.

Melanapamea mixta has been found in Douglas, Josephine, and Curry Counties in southwestern Oregon.

This species has also been found in extreme northwestern California on the West Coast. The rest of its distribution is in eastern North America where it occurs from southern Canada to North Carolina and northern Georgia. The type locality of Hadena impulsa var. mixta Grote is Texas - although there are no recent records of this moth from that state - and there is a single record from New Mexico suggesting that the disjunct West Coast populations are the remnants of a transcontinental distribution across the southern United States.

No information is presently available regarding the larval biology of this species, but it probably feeds on grasses (Poaceae) based on related species.

This species flies during June in the Pacific Northwest. It is nocturnal and comes to lights.