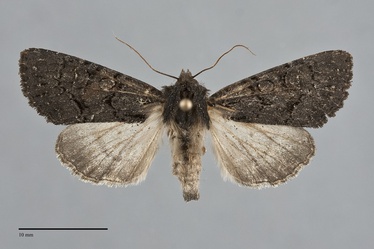 Apamea impulsa is a medium-sized moth (FW length of 15–19 mm) that flies in forests in the northern part of the Pacific Northwest during the summer. It has dull, near-black forewings marked with black lines and spots. The outer margin of the forewing is scalloped. They are even brownish black in color, appearing black except that the lines are darker. A black basal dash is present and there is a similar black mark along the trailing margin proximal to the antemedial line. The fold distal to the claviform spot and the cell near the reniform spot are black in some specimens. The transverse lines are black, partially double with strong and weak components, filled with the ground color. The basal line is two spots on the costa. The antemedial line is excurved, apex at the base of the claviform spot. The median line is black, oblique toward the outer margin from the costa to below the reniform spot, then bent to run parallel to the postmedial line. The postmedial line is scalloped, drawn sharply toward the base on the costa, nearly straight lateral to the reniform spot, and gently curved from the lower cell to the posterior margin which it meets at a right angle. The subterminal line is a series of small yellow spots between veins, each abutted by a black wedge in the distal subterminal area. The fringe is concolorous without a terminal line at its base. The spots are outlined in black and filled with the ground color, except for scattered yellow scales in the peripheral reniform spot. The orbicular spot is moderately large, round or ovoid. The reniform spot is kidney-shaped. The claviform spot is small to nearly reaching the postmedial line. The hindwing is light gray in color with a much darker gray margin, discal spot, veins, and terminal line. The hindwing fringe is two-toned gray. The head and thorax are brownish black.

This species can be identified by its black forewing with black lines. It is similar to Melanapamea mixta, but this species is limited to southwestern Oregon in the Northwest so that these species can be identified by locality. Apamea impulsa has fewer yellow scales in the reniform than M. mixta, has a median line which M. mixta lacks, and lacks a row of small yellow dots at the ends of the veins in the basal fringe that are evident in M. mixta. The subspecies Apamea commoda parcata occurs with A. impulsa in central British Columbia and has a uniform dark forewing, and its color is dark red-brown rather than black. Several species of Melanchra in the tribe Hadenini are black, but they have prominent white markings at the subterminal line that are lacking in A. impulsa.

This species is in central and southern British Columbia south to northern Washington and Idaho in our region.

The western distribution of this moth also includes central and southwestern Alberta. It also occurs in the East, apparently disjunct from the western populations. This distribution extends from northern Minnesota and north-central Ontario to Labrador and Newfoundland in the north south to northern Ohio, northern Pennsylvania, and Massachusetts.

Adults fly from early June through late August throughout its range. The few records encountered for this study are from late June and late July. A. impulsa is nocturnal and comes to lights.