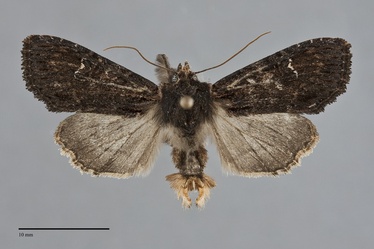 Apamea plutonia is a very dark blackish brown medium-sized Apamea (FW length 16 - 17 mm) with the light outline of the reniform spot as the only prominent forewing marking. The forewing is dull slightly mottled blackish brown with indistinct darker lines and spots. A black line at the base of the trailing margin, a series of short black lines between the veins on the terminal wing, and a black spot in the subterminal area near the anal angle are evident in most specimens. Lighter brown filling of the double antemedial and postmedial line are evident in a few specimens. The orbicular spot is black, barely evident. The pale outline of the reniform spot is thickest laterally and forms the most prominent mark on the wing. The hindwings are medium gray with darker outer third, discal spot, and veins. The hindwing finge is two-toned gray, darker basally and lighter distally, with a slight red tint in a few specimens. The head and thorax are dark blackish brown with a black transverse band across the base of the collar. The male antenna is filiform.

This species flies in moist hardwood forests of eastern North America and in moist conifer and quaking aspen forests of the Rocky Mountains. The Pacific Northwest populations fly in coastal rain forests.  It is usually uncommon to rare in our region.  This species is considered to be management sensitive, depending on disturbances in the forest for habitat.

The range of this species extends east across the boreal zone of North America to Nova Scotia and Maine. It occurs further south in the Midwest and has been collected in eastern Pennsylvania and northern Virginia. Records in the Rocky Mountain region occur as far south as Colorado and northern New Mexico.

This species is single brooded with adults flying in the spring and early summer. Records in our region extend from early April to mid-July. It is nocturnal and comes to lights.