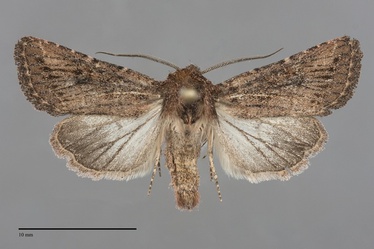 Protorthodes eureka is a small moth (FW length 12–14 mm) that flies in extreme southeastern Idaho during the fall. It has slightly reddish-brown forewings with a series of long, dark wedges in the subterminal area. The apex of the forewing is slightly pointed. The color is medium-dark brown with a slight red tint, darker and grayer on the costa, in the terminal area, and on the veins on the mid-forewing. The subterminal area is usually light gray, appearing lighter but not strongly contrasting. The basal line is absent. The antemedial and postmedial lines are a dark shade of the ground, double, filled with a light shade of the same color. Both lines are reduced to spots on the costa, although they are evident as a series of small dark dots on the veins in some individuals. The subterminal line is pale, slightly yellow, offset below the costa, and smooth and undulating elsewhere. It is preceded by a series of long dark gray to black wedges in the subterminal area that are longest and darkest  opposite the reniform spot and in the fold. The terminal line is dark, interrupted by slightly yellow spots on the veins. The fringe is the same color as the terminal area, weakly checkered with brown in some specimens. The orbicular and reniform spot outlines are pale, very faint. The orbicular spot is a small circle or oval when visible. The reniform spot is kidney-shaped, most evident as dark gray filling in the lower half. The claviform spot is absent. The hindwing is pale whitish gray, marked with a gray marginal band with an indistinct medial margin, dark veins, and a series of dark dots on the veins at the postmedial line in some specimens. The hindwing fringe is white with a light gray base. The head and thorax are similar to the darker portions of the forewing in color, slightly lighter brown at the edge of the collar. The eyes are sparsely covered with fine hairs. The male antenna is bipectinate, appearing moderately wide to the naked eye.

This can be identified by its small size, wedges in the subterminal area, fall flight period, and distribution in the eastern part of our region. It is most likely to be confused with Protorthodes curtica, a much more common and widespread moth in the Pacific Northwest. This moth has a uniform dark shade rather than wedge-like marks along the medial subterminal line.

Protorthodes eureka has been collected in steppe habitat in association with riparian forest and aspen groves in Idaho. It occurs in sage steppe in pinyon pine forest in eastern California.

The known range of this moth is limited to Bear Lake County in extreme southeastern Idaho, although it is likely to be slightly more widely distributed in eastern Idaho. A western Montana record is shown on the Moth Photographers Group web site. It has not been found further west in Franklin or Cassia Counties, Idaho, despite collecting there at the same time that the Bear Lake County population was discovered (L. Crabo unpublished 2012).

The global range extends from central California through the Great Basin to the western Great Plains. It occurs as far north as Alberta on the Great Plains.

The early stages of P. eureka are unknown.

Adults of P. eureka fly during late summer and fall, with records from August and September in most of its range. The Idaho and Montana (Moth Photographers Group accessed 2/2013) specimens were collected during September. It is nocturnal and comes to lights.