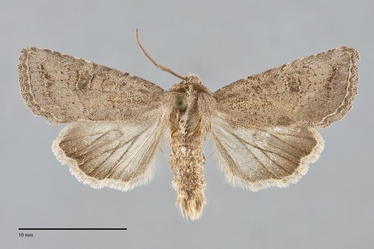 Protorthodes incincta is a small, light, clay-colored moth (FW length 13 - 14 mm) that flies in dry habitats in the eastern part of our region during the fall. The forewing is light tan-gray with a slight violet tint, minimally darker blue-gray in the terminal area. Only traces of the gray basal and antemedial lines are evident, darkest on the costa. The postmedial line is also faint, but usually traceable. It is dentate, convex near the reniform spot and strongly oblique toward the base below the spot. The subterminal line is faint, slightly orange, even and parallel to the outer margin. It is preceded by a dark gray shade on the mid-wing that is condensed into ill-defined spots darkest between the veins. The terminal line is light yellow. The fringe is concolorous with the terminal area. The orbicular spot is partially outlined in thin, dark gray, open anteriorly and posteriorly, moderate-sized, round, and filled with the ground color and a small gray ocellus. The reniform spot is weakly hourglass-shaped, outlined with dark gray lined by thin yellow and the medial and lateral edges and open anteriorly and postierly, filled with the ground color and dark gray in the lower end. No claviform spot is evident. The hindwing is pale gray, gradually darkening toward the outer margin, with dark veins and a very weak discal spot. The hindwing fringe is whitish gray with a yellow and gray base. The head and thorax are even tan-gray similar to the forewing, with weak median tufts behind the collar. The eye is covered with short hairs. The male antenna is bipectinate.

This species is most likely to be confused with Protorthodes curtica, an abundant and widespread fall-flying species. The forewing color of P. incincta is lighter gray than that of P. curtica which is browner, although a few gray-brown specimens of P. curtica approach the color of P. incincta. The shade preceding the subterminal line is nearly even in strength across most of the wing in P. curtica and confined to the mid-wing in P. incincta. Finally, the dark outlines of the forewing spots are darker and more crisp in P. incincta than in P. curtica. Males can be distinguished by the claspers of the valves after brushing the scales from the tip of the abdomen. The right clasper of P. curtica is long and stout, projecting well beyond the ventral margin of the valve, while that of P. incincta is shorter and thinner, ending only slightly below the valve.

This species appears to be geographically variable. Specimens from further east are darker and browner than those from the Pacific Northwest.

This species is widely distributed on open grasslands and native prairies of the Great Plains east of the Rocky Mountains, and is sometimes a pest in agricultural crops.  In the Pacific Northwest, it appears to be mostly restricted to agricultural habitats at low elevations in southern Idaho.

Protorthodes incincta is found from the vicinity of the western border of Idaho east through the Snake River Plain in our region. It also occurs in southeastern British Columbia since the type locality of the synonym Graphiphora smithii is from that region, possibly Kaslo.

This species is found on the Great Plains from southern Canada to New Mexico. It also occurs in the Intermountain region from Idaho south to Arizona and in eastern California.

This species is a generalist feeding on many kinds of herbaceous vegetation such as in the family Fabaceae.

Adults fly in late summer and fall and have been collected in August and September in our region. They are nocturnal and come to lights.

This species is sometimes a pest in legume crops such as beans and alfalfa.