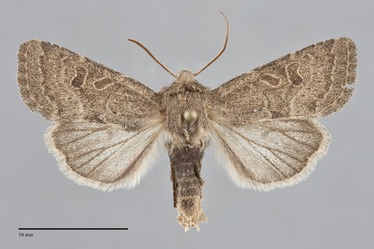 Protorthodes rufula is a small, light orange-gray or gray moth (FW length 12 - 15 mm) that flies in western Oregon and Washington during the spring and fall. Its forewing has light-rimmed spots, gray-filled reniform spots, and pale lines. The forewing color is either nearly even grayish orange-tan or gray, slightly darker and grayer on the costa, in the distal subterminal area, and in the terminal area. The lines are a darker shade of the ground color, double filled with a light shade of the ground. The antemedial line is very faint, often absent except as faint spots on the costa, gently excurved with slight notching on the veins. The median line is diffuse, usually faint or absent. The postmedial line is faint but more consistently visible than the antemedial line, weakly toothed with lines in the medial subterminal area at the tips of the teeth in most specimens, drawn toward the base on the costa, smoothly excurved around the reniform spot and gently curved to run oblique toward the base below the cell. The subterminal line is pale, slightly irregular with a focal offset below the apex, preceded by a shade of slightly darker ground color that is widest at the costa. The terminal line is barely evident. The fringe is slightly grayer than the terminal area. The spots are outlined in pale ground color. The orbicular spot is round or slightly ovoid, filled with the ground color. The reniform spot is weakly kidney-shaped or ovoid, filled with gray or rarely the ground color. A claviform spot is lacking. The hindwing is pale gray, slightly darker toward the outer margin, with a faint gray discal spot and veins. The hindwing fringe is whitish gray with a light gray base. The head and thorax are even orange-gray or gray. The eye is covered in fine hairs. The male antenna is weakly bipectinate.

This species can usually be identified by its range west of the Cascades, light gray or orange-gray color, and pale-rimmed smooth orbicular and reniform spots.  Hairs on the eyes confirms that it is a member of the tribes Hadenini or Eriopygini.  Protorthodes oviduca resembles P. rufula and approaches its range near the Salish Sea on southern Vancouver Island and near Vancouver although the ranges of the two species have not yet been shown to overlap.  It also has dark filling of the orbicular spot, confined to the reniform spot in P. rufula.  Protorthodes curtica is a common species that bears some resemblance to P. rufula.  Most of its range is separated from that of P. rufula by the Cascades, although a small region of overlap exists in southwestern Oregon.  It is browner than the orange form of P. rufula, and males lack a long digitus that extends posterior to the valve in P. rufula, which is easily observed by brushing (D. Lafontaine, pers. comm. 2012).  Homorthodes furfurata is often orange-brown in color, but is smaller than P. rufula, has a less well-defined "busy" pattern of fine lines and spots, and its spots lack the even pale outlines that are found in P. rufula.

Protorthodes rufula demonstrates some geographic variation in our region.  Specimens from the immediate Pacific Coast tend to be smaller and paler than those from further inland.  Based on limited material, populations from the south Puget Sound region are slightly darker gray than Oregon populations and might lack an orange morph.  Early-season individuals are more likely to be gray than late-season ones.

This species is narrowly endemic to the West Coast, and occurs in various forest habitats including coastal rainforests, mixed hardwood forests, oak woodlands, and mixed hardwood-conifer forests at low to middle elevations west of the Cascades.  It is usually uncommon or rare in most habitats. It is often found in sandy habitats, including on ocean beaches.

Protorthodes rufula is found in the western part of the Pacific Northwest from northwestern Washington to southern Oregon. It is predominantly found on beaches north of the Columbia River, but occurs more widely in western Oregon.  A slightly disjunct population occurs on sandy soils near the southern parts of Puget Sound in Washington.

This species may be a foodplant specialist feeding on hardwoods of the family Rosaceae such as cherries (Prunus spp.) and apples (Malus spp.).

This species is double-brooded and has been collected during the spring and again in late summer and fall in our region.  Most records are from mid-April to early June and from August and early September.  Powell and Opler (2009) report that the species can be found throughout most of the year in California. It is nocturnal and comes to lights.