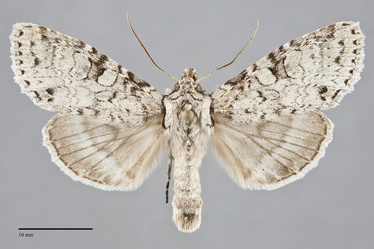 Polia nimbosa is a large moth (FW length 23 - 27 mm) that flies in forests during the summer. West of the Cascades, it is pale whitish-gray, and east of the Cascades, it is silvery medium-gray. Its forewings are marked with large orbicular and reniform spots, two distinct black dots at the posterior subterminal line, and it has a black and white scalloped forewing margin. The forewing is relatively broad. The ground color is pale gray, nearly white to dusty medium gray in the west and dusty silver to medium gray east of the Cascades. Dark gray patches are present on the costa between the basal and antemedial lines, between the orbicular spots to where the median line meets the costa, and in the subterminal space at the subterminal line. The terminal area is also darker in some specimens. The basal, antemedial, and postmedial lines are double, dark gray, and filled with very pale whitish gray. The antemedial line is sinuous, strongest black at the costa and at the base of the claviform spot. The postmedial line is evenly scalloped between the veins and smoothly curving around the reniform spot before joining the trailing margin at a slight oblique angle. The postmedial line is pale, irregular, and preceded by a dark gray to black shade that is usually formed into spots or wedges, strongest hear the costa and in the fold near the anal angle where two black spots are almost always present. The terminal line is black between the veins and shaped to strongly accentuate the scalloped appearance of the margin. The fringe is white in western populations and gray in inland populations. The spots are thin and black. The orbicular spot is large and round, slightly oval, or irregular in shape and filled with the ground color. The reniform spot is large and kidney-shaped, lined with a pale gray inner line in gray specimens and filled with the ground color and some darker scales centrally. The claviform spot is faint in light populations and black in darker ones, filled with the ground color. The hindwing is smoky slightly yellowish light gray in all populations, with diffuse shading medial to the postmedial line and near the margin, darker gray discal spot, veins, and postmedial line, and thin terminal line. The hindwing fringe is white. The head and most of the thorax match the forewing color. The mid collar has a gull-shaped black transverse line, and the lateral edges of the tegulae are black. The anterior thorax bears a weak tuft of darker scales. The eye surface is hairy, and the male antenna is weakly biserrate.

Polia nimbosa exhibits geographic variation in our region. Those from the western part of the Pacific Northwest are light whitish in color. The subspecies name P. n. mysticoides Barnes and Benjamin is available for these populations. Specimens from northeastern Washington and southeastern British Columbia are darker dull gray and are referable to the subspecies P. n. mystica (Smith).

This species is common and widely distributed in moist hardwood forests throughout eastern North America, extending westward to mixed hardwood-conifer forests of the Rocky Mountain region.  In the Pacific Northwest, a disjunct population is endemic to coastal rainforests and mixed hardwood-conifer forests of the Coast Range and along the west slope of the Cascades.  It has been recognized as a distinct subspecies, P. nimbosa mysticoides.  This subspecies is common in moist forests at low to middle elevations west of the Cascades.

The range of this species extends across the boreal zone of southern Canada and the northern United States to the Atlantic Coast. The southern limits of its range are North Dakota and Wisconsin in the Great Plains and Midwest, and North Carolina in the East. It ranges to northern California along the Pacific Coast.

This species is a generalist feeding on many hardwoods.  In eastern North America, it feeds on alders (Alnus spp.) and birches (Betula spp.) in the Betulaceae, huckleberries (Vaccinium spp.) in the Ericaceae, and currants (Ribes spp.) in the Grossulariaceae.  However, the subspecies P. nimbosa mysticoides may be more of a foodplant specialist in coastal rainforests, feeding mostly on red alder (A. rubra).

Polia nimbosa flies during the summer and has been collected from late June until early August in our region. It is attracted to lights.