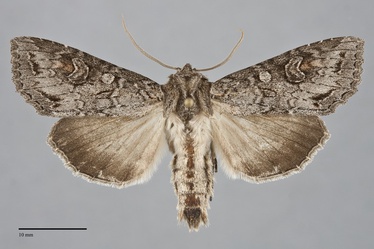 Polia purpurissata is a common large (FW length 21 - 26 mm) dark blue-gray noctuid moth that flies in forests throughout our region. It has prominent black wedges and lines medial to the subterminal line and is red-brown near the reniform spot. The forewing appears to be slightly pointed with scalloped outer margin, especially near the anal angle. The ground color is blue-gray with a slight sheen, darkest gray anteriorly, with red-brown in the cell that is most prominent in and surrounding the reniform spot. The veins are thin and dark without producing a streaky pattern. The basal, antemedial, and postmedial lines are dark gray, double, and filled with slightly lighter gray than the ground. The antemedial line is irregular near the trailing margin. The postmedial line is scalloped, variable in strength from complete to partially absent, and sometimes followed by dark dots on the veins in the subterminal area. The gray median line is diffuse, variable from absent, present at the costal margin, to complete across the wing. The subterminal line is pale, forms a W-mark on veins M3 and CuA1, and is sharply drawn toward the base in the fold. The is preceded by a black shade that forms wedge-shaped marks opposite the cell and posterior to the W-mark. The terminal line is a series of black lines that accentuate the scalloped margin. The fringe is similar to the ground color. The outlines of the orbicular and reniform spots are dark gray. The orbicular spot is oval, moderate to large in size, and filled with the ground color or slightly paler gray. The reniform spot is fairly large, usually asymmetrically kidney-shaped with a larger posterior half that is often extended toward the wing base as far as the orbicular spot along the posterior cell. It usually has a pale inner component and is filled with the ground color, darker gray, and/or rusty brown. The claviform spot is black, variable from small to moderately large. The hindwing is medium-dark gray with a slight yellow tine, suffused with darker gray toward the margin that spares the terminal area near the anal angle. The veins and discal spot are slightly darker that the ground. A dark terminal line separates the whitish fringe from the rest of the wing. The head and thorax are blue-gray. A transverse line is present across the collar and the tip of the collar is lighter than the rest of the thorax. A tuft of scales is present posterior to the collar. Fine hairs cover the eye. The male antenna is moderately bipectinate, appearing thick without magnification.

This species can usually be identified without difficulty by its dark blue-gray color with rusty areas in the cell in combination with the black wedge marks preceding the subterminal line. Other gray Polia species lack the red-brown in the cell. Similar size gray moths in other tribes, such as Apamea occidens, lack the black wedges and have eyes that lack fine hairs on the surface.

Polia purpurissata occurs in forests throughout our region, including west of the Coast Range and Cascade Mountains. It is absent from dry steppe habitats where it is replaced by Polia nugatis.

This species is widely distributed across the boreal zone of southern Canada and the northern United States as well as in the mountains of the West. It occurs across Canada to Nova Scotia and south to Minnesota and New York. In the West, it reaches New Mexico and Utah in the Rocky Mountain region and the Sierra Nevada of California along the Pacific Coast.

This species is a generalist feeding on many kinds of hardwoods such as the Aceraceae, Myricaceae, Betulaceae, and Caprifoliaceae, but it appears to prefer foodplants in the Ericaceae and Rosaceae.  In the Pacific Northwest, it is particularly abundant in ponderosa pine forests feeding on bitterbrush (Purshia tridentata) in the Rosaceae, while huckleberries (Vaccinium spp.) in the Ericaceae may be important foodplants at higher elevations in the Cascades.

Adults fly in the summer and have been collected from late June to August in our region. They are nocturnal and come to lights.