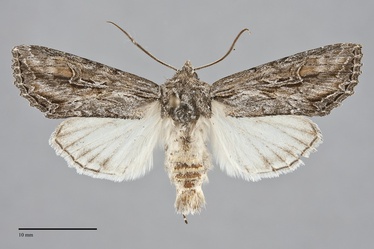 Polia nugatis is a common, streaky gray, moderately large noctuid moth (FW length 19 - 24 mm) that flies in sage steppe in late summer and fall. It is red-brown near the reniform spot. The forewing apex is slightly pointed and the outer margin is weakly scalloped. The ground color is medium-dark gray, darker along the costa and lightest from the reniform spot to the outer margin and in the fold. The dark gray to black lines along the lower cell and dark veins accentuate the longitudinal streaked appearance of the moth. The basal, antemedial, and postmedial lines are gray, double, and filled with lighter gray that is lightest near the trailing margin. The antemedial line is deeply zig-zag, especially the posterior aspect. The postmedial line is faint, although spots on the veins near the outer portion of the line are evident in most individuals. The pale subterminal line is jagged with a sharply pointed W-mark to the outer margin and a V-mark toward the base in the fold. It is preceded by a brown-black shade that forms wedges opposite the cell and near the trailing margin. The terminal line is dark, nearly complete, and accentuates the scalloped margin. The fringe is weakly checkered. The orbicular and reniform spots have thin outer black and inner white outlines and are filled with gray scales, pale at the periphery and darker centrally. The orbicular spot is oval, sometimes elongate and fused to the reniform spot. The reniform spot is deeply indented, asymmetric with larger posterior half that is typically extended toward the wing base along the posterior cell to the lower orbicular post. The hindwing is nearly white with gray suffusion in the submarginal area, thin dark veins and terminal line, and a white fringe. The head and thorax are hoary gray with light and dark barring on the collar and edges of the tegulae. Tufts are present on the anterior thorax. The eye is covered with fine hairs. The male antenna is weakly bipectinate.

This species is unlikely to be mistaken for other Polia species, most of which fly in forests and have a less streaky forewing pattern. The forewing of P. purpurissata is most similar, but it has a dark gray rather than white hindwing. Polia nugatis is more similar to Andropolia diversilineata with which it flies in sage habitats. This species lacks hair on the eye surface and males have a much wider antenna than P. nugatis. The inside of the reniform spot of A. diversilineata is rusty brown and the postmedial line is solid dark gray and even in course; the wing adjacent to the reniform spot is rusty in P. nugatis and the postmedial line is streaky and poorly defined.

This species is common and widely distributed on dry, open sagebrush steppe and in juniper woodlands at low to middle elevations throughout much of western North America.  It is very common throughout the Pacific Northwest in arid rangelands east of the Cascades.  However, it was mostly eliminated from sagebrush steppe that had been burned over in a wildfire, so it is sensitive to fire disturbance.

Polia nugatis is found in dry interior habitats from southern British Columbia south through the Columbia Basin to the southern parts of Oregon and Idaho.

The range of this species extends from southern Montana, Wyoming, and Colorado west through Utah and Nevada to eastern and central California outside of our region.

Adults fly in the late summer and fall. Collection records from our region begin in mid-July and extend through the fall months, but most specimens are from late August and September. It is nocturnal and comes readily to light.