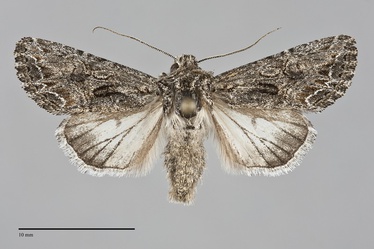 Anarta fulgora is a small gray moth (FW length 13 - 14 mm) that flies in sage steppe during late spring and early summer. It has a relatively ill-defined pattern, except for a thick black claviform spot and a pale subterminal line contrasting with adjacent blackish gray. The forewing ground color is slightly mottled medium-gray without brown tints, slightly darker along the trailing margin and blackish gray in the terminal area and medial to the subterminal line. A small faint basal dash is present. Most of the transverse lines are double gray, evident as spots on the costa but faint elsewhere. Usually short segments of the mid-antemedial line and the oblique postmedial line below the reniform spot are visible. The subterminal line is pale luteous white, offset toward the base below the costa, forming a strong W-mark to the outer margin on M3 and CuA1, and parallel to the outer margin elsewhere. It is preceded by series of dark gray wedges between the veins below the costa and near the W-mark, increasing in size near the mark. The orbicular and reniform spots are outlined in thin black. The orbicular spot is oval, often incomplete anteriorly, filled with light gray and a central eyespot. The reniform is kidney-shaped, filled with the ground color and a patch of purplish gray inferiorly. The claviform spot is thick and black, reaching over half the distance to the postmedial line, apically rounded. The hindwing is pale whitish gray at the base with dark gray veins, small discal spot, and marginal band that is thinner and lighter in males than in females. The head and thorax are similar gray to the forewing. The collar is tan with a black transverse line below the distal third and a light gray edge. The edges of the tegulae are slightly darker gray. The male antenna is bead-like. The surface of the eye is covered with fine hairs.

This species can usually be identified by its gray color and apically-rounded thick black claviform spot in combination with its early flight season. It is similar to Scotogramma ptilodonta, a rarely collected species only known from south-eastern Oregon in our region, but has better defined forewing markings and darker hindwings in males. These species can be differentiated by collection dates since A. fulgora flies early in the summer and S. ptilodonta occurs in July and August. Other spring-flying species in the tribe Hadenini are brown rather than gray, including Scotogramma fervida which is similar in size to A. fulgora.

This species is narrowly restricted to desert habitats in the Great Basin.  It is moderately common on very dry sagebrush steppe at low elevations, for example in the Alvord Desert of southeastern Oregon.

Anarta fulgora is most common in south-eastern Oregon in our region. It has been found once in the southern Columbia Basin in Benton County, Washington.

This species is found in western North America. The range outside of the Pacific Northwest appears to be limited to Nevada and the eastern and southern parts of California.

Anarta fulgora is single brooded and flies during the spring and early summer. It has been found from April to mid-June in our region. It is nocturnal and comes to lights.