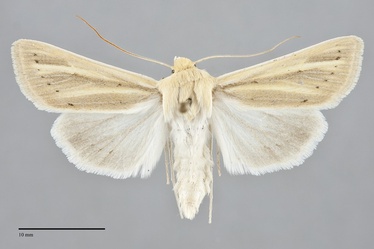 Copablepharon absidum is the most commonly-encountered Copablepharon in eastern Washington and eastern Oregon. It is medium-sized (FW length 16–20 mm) with a light ochre yellow color and slightly streaky appearance. The palest yellow areas are the costa, the cell and area of the reniform spot, the fold region, and the posterior margin. The difference between the lightest and darkest areas is variable, ranging from very slight in nearly all-yellow specimens to quite marked in specimens with extensive gray suffusion. The darkest specimens are encountered in early summer. The cubital vein is black near the cell in a few individuals. The antemedial and postmedial lines are a series of dots, also variable in strength. The hindwing is white with gray suffusion that varies between very light to dark in individuals with dark forewings. The head and thorax match the forewing ground color, while the abdomen is light cream colored. The male antenna is bead-like.

This species can be confused with several other Copablepharon species in our area. It is most closely related, and is closest in superficial appearance, to Copablepharon atrinotum. Copablepharon absidum is usually lighter-colored with fewer dark markings than is found in this species. The two species also differ in the shape of the valve of the male genitalia. In practice, they can be separated by range, since C. absidum is restricted to the northern and eastern parts of Oregon (to Catlow Valley near Steens Mountain, Harney County) whereas C. atrinotum occurs in the south-central portion (Alkali Lake, Lake County). Copablepharon grandis which occurs in southern Oregon and Idaho has uniform light yellow forewings and white hindwings without the pale streaks or dark suffusion evident in C. absidum. Copablepharon mutans, found in dunes near the Columbia River in late summer and early fall, has more uniformly dark hindwings and wider biserrate antennae than those of C. absidum.

Copablepharon absidum is most common in the Columbia Basin. It has been recorded from near Osoyoos in southern British Columbia, but is not known to occur there at present. It is also found in south-eastern Oregon and southern Idaho.

This species is a Pacific Northwest endemic and has not been found outside of this region.

This species is a burrowing cutworm that burrows through sandy soil, and feeds on herbaceous vegetation including sand verbena (Abronia spp.) in the Nyctaginaceae.

This species has a long flight season. Adults have been found from late spring until late fall. Records demonstrate that it is most commonly collected during May and early June and again in the fall suggesting the presence of two main broods. It is nocturnal and comes readily to light.