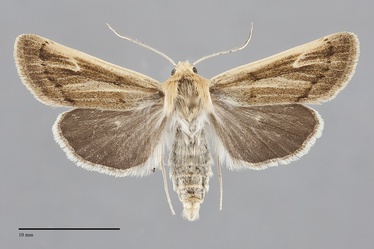 Copablepharon mutans is a rarely collected, dune-restricted species found along the Columbia River in Washington. It is a medium-sized moth (FW length 14 - 19 mm) with a relatively long forewing. The ground color is light to medium ochre-yellow with variable dark ochre to gray longitudinal streaking and veins. The darker areas tend to spare the costa, the area of the reniform spot and the area distal to it, and the region of the fold. Females are larger than the males and tend to be lighter colored. The antemedial and postmedial lines are black and are also variable in strength, either a series of dots on the veins or complete lines that are darkest on the veins. The spots are absent, although the position of the reniform spot is evident as absence of dark shading in most individuals. The hindwing is dark gray with a pale whitish fringe. Pale white areas are present at the base of the wing and along the outer margin near the anal angle in some individuals, especially in females. The head and thorax match the forewing ground color while the abdomen is pale gray, paler toward the posterior end. The male antenna is narrowly bipectinate, about 2X as wide as the shaft. The unscaled portion is black.

This species is closely similar to Copablepharon columbia in appearance, although C. mutans is more variable. The two species are best separated by flight season, since C. columbia flies in early summer and C. mutans flies in late summer and early fall. Small and heavily streaked Copablepharon absidum, which occurs with C. mutans, can be told by their lighter colored hindwings. Also, the male antenna of C. absidum is beadlike, not biserrate as in C. mutans.

This species is only known from sand dunes at low elevations in the Columbia Basin of central Washington.  It may be locally common in this very restricted habitat.

This species is restricted to Washington.

No information is presently available regarding larval foodplants of this species, but it is probably a burrowing cutworm that burrows through sand and feeds on herbaceous vegetation. The dominant vegetation in the Sand Hollow dune system is a species of goosefoot (Choenopodiaceae), suggesting that this might be the foodplant. Psoralea (Fabaceae), a known or suspected foodplant of several other species in the Copablepharon longipenne species-group, is not found in this dune system.

The adults have a very short flight season in late August and early September. They are nocturnal and come to lights.