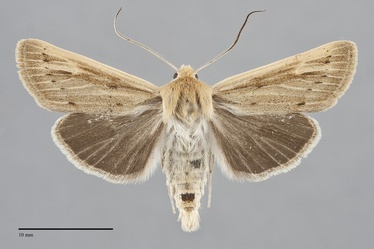 Copablepharon columbia is a rarely collected, late spring-flying Copablepharon that is restricted to a single dune system near Moses Lake, Washington. It is a medium-sized moth (FW length 16 - 18 mm) with relatively long and narrow forewings. The ground color is ochre yellow with a dusting of dark scales that give an olive tint to the forewing. The costa, fold, area of the reniform spot and distal to it, and veins are lighter ochre. The antemedial and postmedial lines are marked by series of black spots. The hindwing is even gray with a slightly paler fringe. The head and thorax match the forewing ground color, and the abdomen is darker gray covered with pale hair-like scales. The male antenna is weakly bipectinate, about 2X as wide as the shaft, and the unscaled portion is black.

This species is very similar to Copablepharon mutans in appearance, but tends to be darker ochre-colored, more uniform with less evident longitudinal streaks, and has less variation between individuals. These species are most easily distinguished by flight season, since C. columbia flies in early June and C. mutans flies in late August and early September.

The type locality of Copablepharon columbia Crabo and Lafontaine is The Potholes, Grant County, Washington.

This species is only known from sand dunes at low elevations in the Columbia Basin of central Washington. It flies over open dunes and has never been found in other habitats.

Copablepharon columbia has an extremely limited range. It has only been found on a few sand dunes near the southwest shore of Moses Lake (Moses Lake dune complex). Most of the known specimens have been collected on a single dune despite more extensive sampling in the vicinity.

This species is endemic to the central Columbia Basin.

No information is presently available regarding larval foodplants of this species, but it is probably a cutworm that burrows through the sand. The most likely foodplant is a Psoralea species (Fabacaceae) that grows on the dunes where this species is found. Other Copablepharon species in the longipenne species-group are known to feed on Psoralea (Lafontaine 2004).

Adults are single brooded and have a short flight season in early June. This moth appears to be extremely localized and is rarely collected away from open dunes. They are nocturnal and come to light.