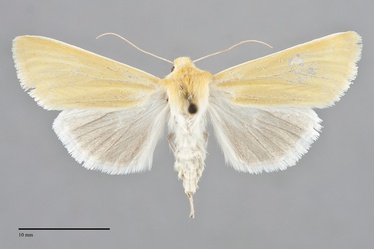 Copablepharon canariana is a bicolored, yellow and white, medium-sized moth (FW length 17 - 18 mm) found in the southern part of the Pacific Northwest. The forewing is nearly even light to rich canary yellow. The costa and outer half of the fringe are white. These characters are best examined under magnification, especially in pale or worn specimens. The hindwing is white, often shaded with gray in darker specimens, but mostly white in pale ones. The head and thorax match the forewings. The male antenna is bead-like. The tip of the uncus of the male genitalis is expanded to a teardrop shape, and the female ovipositor lobes are laterally flattened. These characters can be examined without dissection under moderate magnification.

This species can be confused with several other Copablepharon species in our region. Pale specimens are most similar to C. grandis, which has a similar range and flight period. The forewings of this species are also pale yellow, but it lacks the white costa and bicolored fringe of C. canariana, and it lacks the features of the male and female genitalia described above. The forewings of pale specimens of C. absidum and C. atrinotum are usually faintly longitudinally streaked streaked with pale and dark and lack the white costa of C. canariana. They also lack the unique genitalia features of C. canariana.

This species is widely distributed throughout much of western North America in semi-wetland habitats at low elevations.  In the Pacific Northwest, it is very narrowly restricted to wet areas at the edge of creeks, lakes, marshes, and alkali flats that are wet during the spring in low elevation desert regions east of the Cascades.  It is often common in this very restricted habitat.

Copablepharon canariana is found in central and southern Oregon and southern Idaho in our region. It has been most commonly found along the south slope of the Blue Mountains in central Oregon.

This species range includes much of the Intermountain and Great Basin parts of the American West.

No information is presently available regarding larval foodplants of this species, but it is probably a burrowing cutworm that burrows through loose, moist sediments and feeds on herbaceous vegetation.

This species is single brooded with adults flying in July and August in our region. It is nocturnal and comes to lights.