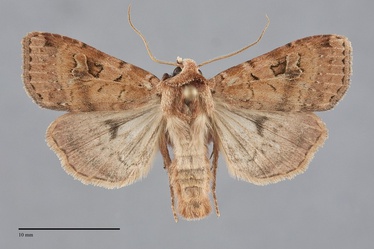 Diarsia esurialis is a common variable, light orange-brown or gray-brown, small to medium-sized moth (FW length 13 - 16 mm) with relatively broad wings with a variable pattern, usually with blackish brown and rarely slightly darker brown in the cell outside of the forewing spots. The forewing color is somewhat variable, sometimes much lighter yellow-brown. All have a darker blackish brown to red-brown patch at the costa preceding the subterminal line; in some the entire area between the postmedial and subterminal line is darker gray or red-brown, and the median shade is often a similar shade and darkness as this area. The transverse lines are gray to brown, double, and filled with slightly lighter yellow-brown or gray-brown than the ground color. The antemedial line is irregular, while the postmedial line is smooth in shape and "squared-off" opposite the cell. The inner component is dentate, and the tips of the "teeth" are accentuated as a series of short lines lateral to the remainder of this line in some specimens. The subterminal line is pale and smooth, variably preceded by dark dots opposite the cell or followed by brown ill-defined dots in a few specimens. The terminal line is comprised of dark brown triangular spots between the veins. The orbicular and reniform spots are fairly large, although the size of the former is also variable. Both are thin and black with a thin pale inner component and filling of the ground color. They are most evident due to the black-brown filling of the adjacent cell. The claviform spot is variably present, often as a dot at its apex or a line representing the anterior edge of the spot. The hindwing is light yellow-gray with variable gray suffusion and ill-defined gray discal spot, thin wavy postmedial line, ill-defined submarginal band and a yellow-gray to reddish-gray fringe. The head and collar are similar to the forewing ground color with the collar slightly lighter than the rest of the thorax. The male antenna is biserrate with triangular individual segments.

This species can usually be identified in its West Coast range by its light orange-brown ground color, wing shape, and pattern, especially in forms with dark in the cell between the orbicular and reniform spots. Gray-brown colored individuals of this species closely resembles Diarsia calgary, a rarely species which replaces it in the Rocky Mountains and northern British Columbia. The forewing of D. calgary is gray-brown with a hoary dusting of gray scales which D. esurialis lacks. Also, the male antenna of D. esurialis is biserrate while that of D. calgary is beadlike. These species also differ in characters of the male and female genitalia described by Lafontaine (1998).

Diarsia esurialis is found near the Pacific Coast throughout the Pacific Northwest. Its range extends inland to near the crest of the Cascade Range.

This species occurs on the West Coast of North America from the Alaska Peninsula to the vicinity of San Francisco, California.

This species appears to feed on both hardwoods and herbaceous vegetation.  Specific records include alders (Alnus spp.) and hazelnuts (Corylus spp.) in the Betulaceae, and sword fern (Polystichum munitum) in the Polypodiaceae.