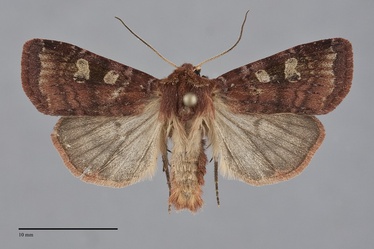 Diarsia rosaria is a very common, small to medium-sized moth (FW length 12 - 15 mm) that is found in a variety of habitats almost throughout the entire season in the Pacific Northwest. It has a relatively short and broad red-brown forewing marked with light ochre in the orbicular and reniform spots. The forewing ground color is medium dark red-brown, often with a gray cast that is most evident in females. The cell, costa, and terminal area are often darker red-brown to gray-brown. The transverse lines are slightly darker gray with filling of the ground color. The antemedial and postmedial lines are similar, fairly even. The veins lateral to the postmedial line are darker in some specimens, producing a series of thin marks oriented along the axis of the forewing. The median line is faint, evident near the costa and trailing margin. The subterminal line is pale and even to slightly irregular. The orbicular and reniform spots are similar, black with an inner light ochre line and partially filled with light ochre to gray scales. The claviform spot is usually obsolete, although the tip is sometimes evident as a gray spot. The hindwing is light gray with darker gray margin, diffuse discal spot, and veins, and a reddish fringe. The head and thorax match the forewing color. The male antenna is weakly biserrate.

This species can usually be identified by its small size and light-filled spots. Diarsia rubifera, an uncommonly collected species that occurs in southern British Columbia and adjacent Washington during late summer, is similar in color. It has a more obscure pattern with a diagnostic black dot at the expected position of the tip of the claviform spot that D. rosaria lacks. Abagrotis apposita, a widely distributed species that usually flies in dry forests during the summer, is slightly larger and the entire wing is shades of brick red, including the filling of the spots. Xestia xanthographa, another common species that is found in urban environments and grassland from the western part of the Pacific Northwest east near the Oregon-Washington border to western Idaho in late summer, is also similar and has light ochre filling of the spots on a slightly more orange red-brown wing. Its hindwing is lighter than that of D. rosaria. Lycophotia phyllophora, an eastern species that reaches the western part of its range in the Peace River region of north-eastern British Columbia where it flies during the summer, is red-brown with a gray pattern. It is also slightly larger than D. rosaria, its forewing pattern is less well-defined, and it lacks any pale ochre scales within the forewing spots.

This species is widely distributed in moist forest and grassland habitats across Canada and throughout much of western North America.  In the Pacific Northwest, it is common to abundant in coastal rainforests, mixed hardwood forests, mixed hardwood-conifer forests, oak woodlands, oak savanna, disturbed grasslands and agricultural areas, and even urban areas at low to middle elevations west of the Cascades.  It is also common to abundant in dry, open ponderosa pine forests and mixed hardwood-conifer forests at middle elevations east of the Cascades.

Diarsia rosaria is abundant throughout much of the Pacific Northwest where it occurs on both east and west sides of the Cascade Mountains. It has been collected most frequently from southern British Columbia south, but records for northern British Columbia are shown by Lafontaine (1998). The are no records for Idaho south of the Panhandle, but it occurs in western Montana.

This species occurs to the south of our region in California to the central Coast and Mono Lake region, and in the Rocky Mountains to northern New Mexico. Elsewhere, it has been collected across the Continent in a relatively narrow north-south band from central Yukon Territory eastward near the Canada-United States border to northern Wisconsin, southern Labrador and Nova Scotia.

This species primarily feeds on grasses (Poaceae), although it will also feed on herbaceous vegetation in families such as the Rosaceae.

The phenogram demonstrates a clear bimodal seasonal occurrence, one from late April to June, and the other from July to October, indicating that the species is bivoltine in our area. The adults are nocturnal and come to lights.