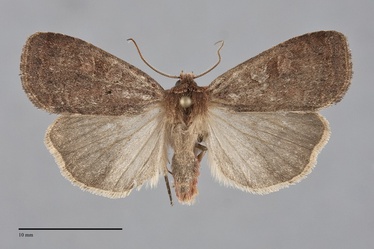 Diarsia rubifera is a drab, red-brown Diarsia species that has a small black spot at the apex of the claviform spot that is lacking in other members of the genus. It is a small to medium-sized moth, like other Diarsia species (FW length 14 - 15 mm). The markings are usually relatively inconspicuous. The spots and transverse lines are usually evident as slightly paler filling. The orbicular and reniform spots are moderately large. The position of the end of the claviform spot is marked by a black dot. The hindwing is shiny medium gray with slightly darker margin, discal spot, and veins. Its fringe is pale with a slight reddish tint. The head and thorax match the forewing ground color, with a slightly darker base of the collar. The male antenna is biserrate.

Diarsia rubifera can usually be identified by the color and shape of the wings in combination with the diagnostic black spot as the only indication of the position of the claviform spot. This spot is best shown on the left wing of the imaged specimen.

Noctua cynica var. umbrosa Dyar and Noctua perumbrosa Dyar were named from Kaslo, British Columbia. Both are considered to be synonyms of this species.

This species is widely distributed in moist hardwood and conifer forests of eastern North America, extending westward to the Rocky Mountains.  It appears to be rare and sporadic in the Pacific Northwest, and may be limited to the northern Rocky Mountain region.

Diarsia rubifera is found in southern British Columbia and northern Washington from the Alberta border to Vancouver Island and the Puget Sound region. Most of the records are fairly old. Lars Crabo has never collected this species in our region despite over 20 years of collecting in the Pacific Northwest.

This species is most widely distributed east of the Mississippi River where it occurs from northern Quebec and the island of Newfoundland south to North Carolina and northern Minnesota. Its range extends west to western Alberta across Canada's Prairie Provinces and south to Colorado in the Rocky Mountains.

Adults fly in late summer. Lafontaine (1998) reports the flight period as mid-July to mid-August for the entire range of the species.