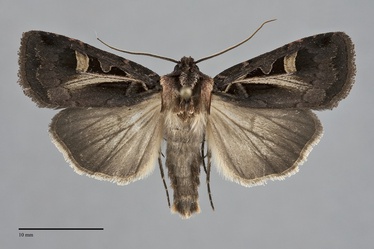 Feltia herilis is a dark purplish-gray moth with prominent light ochre in the reniform spot and similar-colored light streaks on and posterior to the cubital vein. It is medium-sized (FW length 16–19 mm) with relatively broad forewings. The ground color is nearly uniform dark gray with a slight purple to red tint. The costa is dark near the subterminal line, and the terminal area is usually darker gray than the ground. The transverse lines are dark and thin, but are inconspicuous except at the costa. The position of the antemedial line is most evident as a gap between a thick basal dash and the large black claviform spot. The postmedial line is weakly scalloped. The cubital vein is light ochre from the basal line to the reniform spot, and the area below it is similar colored fading away near the postmedial line. The orbicular spot is light ochre and broadly U-shaped, forming an area of the ground color in the black that fills the cell outside the spots in the median area. The reniform spot is large and conspicuous due to its light ochre filling. The hindwing is dirty light gray with a slight yellow tint at the base with a sooty gray broad dark marginal area, veins, discal spot, and fringe; that of females is darker near the base than that of males. The head and thorax are somewhat variable, usually either purplish dark gray like the forewing but often with a red tint. The collar is two-toned with a darker base and lighter tip separated by a thin dark line in most individuals. The male antenna is weakly biserrate with stout fasciculations.

Feltia herilis can be identified by the combination of dark gray forewing with light reniform spot and streak below the cubital vein. The only species with which it could be confused is Feltia subgothica which is restricted to southern Idaho in our region. It has a light-colored costal margin to the forewing, not dark as in F. herilis.

Larva is smooth, light reddish brown dorsally and gray-brown ventrally with subdorsal and lateral rows of small black spots.  It is illustrated by Lafontaine (2004).

This species is widely distributed in moist forest habitats throughout eastern North America.  In the Pacific Northwest, it is more narrowly restricted to moist grasslands, oak savanna, and oak woodlands at low elevations west of the Cascades.  It is also common in disturbed forest clear-cuts of coastal rainforests at low to middle elevations, and is an early successional species in forest ecology. It is found mostly in forests east of the Cascades and Coast Mountains. It is found in in agricultural areas in drier areas, such as along the Yakima River in Washington. It has not been collected in eastern Oregon.

Feltia herilis is found throughout the western part of the Pacific Northwest from south-western British Columbia to Lane County in west-central Oregon. It has a more limited range east of the mountains, primarily in southern British Columbia and southern Washington, and appears to be absent from much of eastern Oregon. Scattered Idaho records are from the Panhandle and Snake River Plain.

This species is broadly distributed in North America from the East Coast to central Texas west to the Pacific Northwest. The northern range limits are Newfoundland, central Manitoba, northern Alberta, and southern British Columbia.

This species is a climbing cutworm that feeds on general herbaceous vegetation.

The species is single brooded with records from early June to mid-September.  However, most records are from July and August.  It is nocturnal and comes to lights.