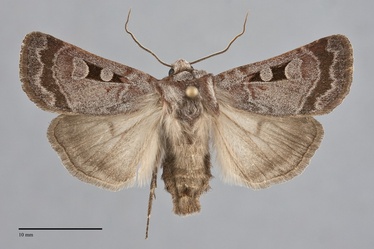 Feltia mollis is a broad-winged, medium-sized (FW length 16 - 19 mm), gray moth that flies in montane and boreal forests in Canada. It has large, pale forewing spots that are exaggerated by the black cell. The forewing ground color is light bluish-gray, often with a gray-brown to red-brown suffusion. This suffusion is darkest in the subterminal area and usually spares the forewing base, trailing margin, and costa. The transverse lines are gray, double with filling of the pale ground color. The antemedial and postmedial lines are both smooth; the latter forming an arc across the distal wing. The subterminal line is pale and sinuous, mostly evident due to darker gray medial to it. The orbicular and reniform spots are relatively large and broad, outlined in black, but are most evident because their filling contrasts with the cell which is black to the reniform spot. The claviform spot is black, variable from absent or a few black scales to complete. The fringe is dark gray like the adjacent terminal wing. The hindwing is light yellow gray with gray diffuse discal spot and submarginal band. The head and thorax match the forewing, usually with a red-brown or black band across the base of the collar. The male antenna is weakly biserrate.

Feltia mollis can be identified by its gray and brown-gray forewing with black cell, light gray spots, and smooth postmedial line.

This species is widely distributed in boreal spruce-fir forests across Canada. It is found in moist coniferous or quaking aspen forests in the Rocky Mountains.

This boreal species has been found as far south as southern British Columbia in the Pacific Northwest. It  likely occurs farther south, especially near the Rocky Mountians.

This species occurs in boreal habitats across North America from Yukon Territory, Northwest Territory and southern Labrador to the northern parts of New York, Michigan, and Minnesota. It ranges south to northern New Mexico in the Rocky Mountains.

Adults have been collected from mid-July to early August in our region. It is nocturnal and comes to lights.