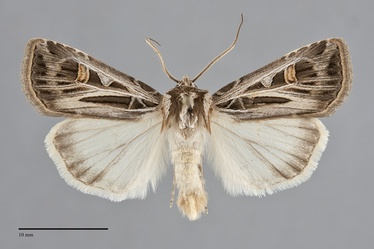 Feltia jaculifera is a common and widespread streaky pale and dark gray moth with a long black claviform spot and pale orbicular and reniform spots that are accentuated by black in the adjacent cell. It is medium-sized (FW length 15–18 mm). The forewing ground color of is pale brown gray. The cell is black medial to the reniform spots. Dark gray is present between the reniform spot and the postmedial line, along the costa near the subterminal line, and in the terminal area. The veins bordering the cell are light gray from the base to the reniform spot. A thick, black basal dash connects the claviform spot to the forewing base, although it is interrupted by the pale filling of the crossing lines. The veins are thin and black, adding to the streaky look to the forewing. The lines are inconspicuous, evident as gray dots along the costa and pale filling across the basal dash. The postmedial line is weakly scalloped. Its position is indicated by termination of adjacent dark areas and a series of black dashes between the veins in the adjacent medial area. The subterminal line is also a transition between pale gray medial to it and dark gray in the terminal area. It forms a "W" mark at veins M3 and CuA1. A series of black spots abuts the subterminal line in the dark terminal area. The orbicular spot is a broad U, open toward the costa and filled with similar pale gray. The reniform spots is fairly large with a weak lateral indent. It is filled with pale gray and pale rusty scales, usually appearing light orange. The claviform spot is very long, nearly reaching the postmedial line. The hindwing is nearly white with a thin, smoky gray marginal shade in males, usually light gray with a wider gray marginal band, but occasionally entirely dark gray in females. The hindwing fringe is white in both sexes. The head and thorax are similar in color to the forewing, usually light brown-gray to gray-brown. The collar is slightly banded with a dark transverse line near the distal third. The male antenna is biserrate with stout fasciculations.

This species can usually be identified without difficulty due to its streaky light gray color, "busy" dark pattern with a very long claviform spot, and light orange reniform spot. Feltia subgothica, which has been found in the Snake River Plain of Idaho, is generally similar in pattern but is darker gray-brown with a light costa, shorter claviform spot, and darker hindwing. Prognorisma substrigata is a streaky species with black pattern from eastern British Columbia in our region. It has a longer and more rectangular forewing. It also differs in many details of the pattern, including a smooth convex postmedial line with prominent pale filling that F. jaculifera lacks.

The type locality of the synonym Feltia edentata Smith is Pullman, Washington.

Larva is smooth, light reddish brown dorsally and gray-brown laterally with subdorsal and lateral rows of small black spots.  It is illustrated by Lafontaine (2004).

This species is widely distributed in open grassland and prairie habitats throughout most of North America, and massive numbers are often found on the short-grass prairies of the Great Plains.  In the Pacific Northwest, epidemic outbreaks may occur on particularly disturbed dry grasslands or agricultural areas at low elevations west of the Cascades, and this species is also common in oak savanna.  East of the Cascades, this species is common on dry, open sagebrush steppe, and large numbers frequently occur in disturbed agricultural and urban areas at low elevations, particularly in alfalfa fields and livestock pastures.

Feltia jaculifera is found throughout much of our region south of south-central and eastern British Columbia. It is most widely distributed in dry habitats east of the Cascade Mountains.  It is less widely distributed west of the Cascades, although it is common in the Olympic Mountain rain shadow in southwestern British Columbia and northwestern Washington and in the Willamette Valley of western Oregon.

This species is common across large parts of North America from coast to coast. The northern limits of its range are the St. Lawrence Seaway in Quebec, Ontario near Lake Superior, south-central Northwest Territory, and central Alaska. It is found south to the Florida Panhandle and northwestern Mexico although it has not been found in southern Nevada or California south of the San Francisco Bay region.

This species is a climbing cutworm that feeds on general herbaceous vegetation, particularly the families Asteraceae and Fabaceae, but will also feed on grasses (Poaceae) during epidemic outbreaks.

Adults are on the wing from mid-July to October in our region, peaking in late August and early September.  They are nocturnal and come readily to light.

This species is a minor pest in agricultural herbaceous crops and in livestock pastures.