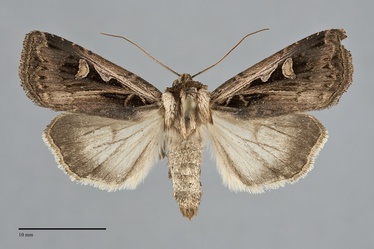 Feltia subgothica is a dark gray-brown species that is found in southern Idaho in the Pacific Northwest that resembles the more widespread Feltia herilis but has a streaky pale costa. It is medium sized (FW 14 - 18 mm) with dark gray-brown ground color. The costa and radial vein are pale brown gray to dull ochre, and there is a similar pale streak posterior to the cubital vein near the claviform spot that extends to the anal angle. The transverse lines are black and double, with pale filling but are relatively inconspicuous except at the costa where the lines are marked by dark spots. The antemedial line is evident as a pale gap between the thick black basal dash and the large black claviform spot. The postmedial line is weakly scalloped. It is preceded by black lines opposite the reniform spot as well as below the spot. The pale, slightly irregular subterminal line is preceded by dark gray at the costa and a series of black wedges below the radial vein and between the branches of the median vein. The orbicular spot is a broad V or U, open toward the costa and filled with the same pale as the adjacent costa. It forms a defect in the black filling of the cell that surrounds the spots in the medial area. The reniform spot is large with a weak lateral indentation. It is black with pale filling similar to the costa. The hindwing is pale whitish gray at the base and smoky gray at the margin with dark veins and very faint discal spot. The fringe is pale, usually two-toned with a gray inner portion. The head and thorax are brown-gray to brown, slightly mottled with a weak transverse band across the collar. The male antenna is weakly biserrate with stout fasciculations.

This species is widely distributed in forest and grassland habitats throughout most of eastern North America, extending westward to the Rocky Mountains.  It barely enters the Pacific Northwest.

Pacific Northwest records of Feltia subgothica are limited to Idaho where it has been found in the Panhandle and Snake River Plain (Lafontaine 2004).

Feltia subgothica occurs primarily in eastern and central North America, ranging as far west as Idaho, Utah, and central Arizona. The northern limit to the range is southern Quebec near the St. Lawrence River and southern Saskatchewan.

This species is a climbing cutworm that feeds on general herbaceous vegetation.

The adults are on the wing in late summer in most parts of its range.